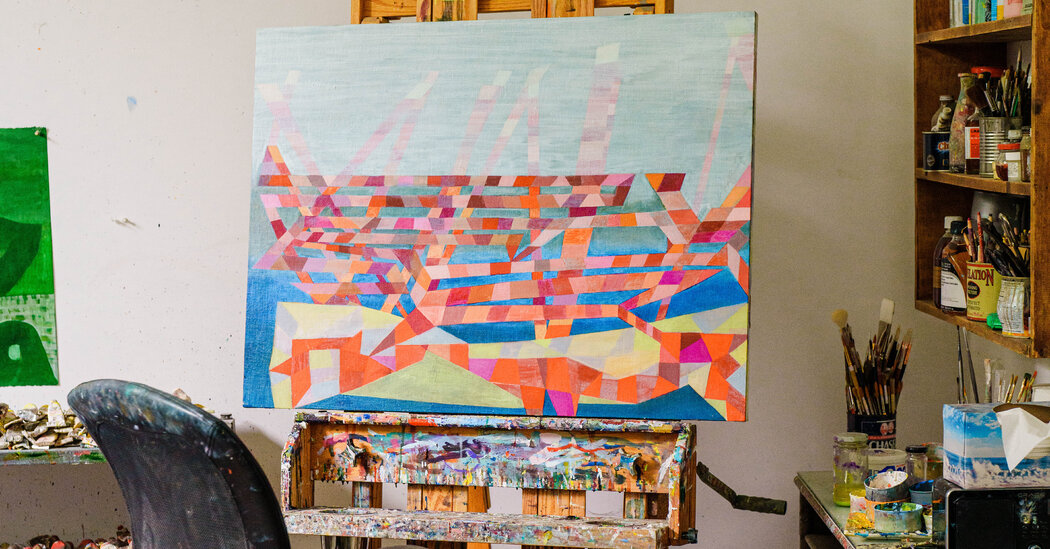 With peasant diligence and detective ingenuity, the painter Thomas Nozkowski demarcated and cared for a deceptively modest territory for almost five decades. His harvest was inexhaustible. “What I appreciate most about Nozkowski’s work is the endless inventiveness,” said sculptor Martin Puryear, his upstate New York neighbor and close friend, in a telephone interview. “Each of his paintings is its own story, and the story of the painting is in the painting.”

When he died in 2019 at the age of 75, Nozkowski was at the top of his game. A selection of 15 works, “Thomas Nozkowski: The Last Paintings”, which will open on September 10 at the Pace Gallery in Chelsea, shows how he can be seen in a compact format – all but one on canvas on panels measuring 22 x 28 Zoll – was able to conjure up surprising and beautiful combinations of abstract shapes. Each painting from 2016 to 2019 is strikingly different from the next, but is unmistakably by the same artist. “He’s always been an extremely methodical person,” noted Puryear. “He really wanted to tie things together for himself in the end. His extremely disciplined focus closed even more. “

Nozkowski rejected the grandiosity of the Abstract Expressionists of the previous generation, whose stately effusions demanded the huge wall surface that only museums or rich collector’s residences could offer. “For political reasons, I found the large-scale macho man abstractions of the early SoHo under contempt,” he said in a 2015 Artspace interview.

Instead, he chose to paint “a size that matches my friends’ apartments and could hang in a three-bedroom walk-in apartment on Seventh Street.” From 1972 to 1992 he relied almost exclusively on prepared canvas panels measuring 16 x 20 inches, a material typically used by amateurs. Aside from satisfying his democratic impulses, the small size allowed him to erase and rework an entire painting over and over again without heroic sacrifices.

“It doesn’t belong to any group, it doesn’t belong to any category,” said Sid Sachs, exhibition director at the University of the Arts in Philadelphia. “You have to understand the entire history of art of the 20th century to know what these pictures are about. Ultimately, they are not 100 percent known. You are mysterious. They give you energy when you look at them. “

Nozkowski was married for 52 years to Joyce Robins, a ceramic sculptor and painter whom he met at Cooper Union, where they both studied. For 45 years until they were forced to give up, a converted synagogue on Hester Street on the Lower East Side was their primary residence, but Nozkowski’s heart was housed in the house and adjoining studios in High Falls, NY, below the Shawangunk Mountains , which they acquired in 1977. The studios have remained largely untouched since his death. The tin cans of tuna and cat food in which he mixed his oil paints are still on his easel. The many bookshelves testify to his deep and broad intellectual passion for architecture, film, art history, R&B and country music and much more; His strict categorization systems for every book, music CD and film DVD remain in place. “He was asking for new bookshelves before he left,” said Robins. While he was painting, he played music, mostly gospel, R&B, and country. The last CDs he listened to are still on a bookshelf.

“There are thousands of drawings,” said her son Casimir Nozkowski, a filmmaker. “He enjoyed organizing them.”

Nozkowski’s drawings were not preparatory sketches for the paintings. Brush in hand, he began a painting as an exploration without a particular composition in mind. He was not a formalist guided by a lawsuit. The abstract paintings were always about something in the real world. Perhaps he was inspired by a landscape he had seen on one of his frequent hikes on the many mountain trails he knew well. It could be a movie or book that piqued his interest, or a friend or family member he was thinking of. The source material was usually invisible to a viewer. “He always talked about these Chinese painters who went out into the countryside and then back to the studio,” explained Robins. “It had to go through the sieve of your consciousness.” Rub out, scrape off, clean, glaze, trickle, thin out, he changed the picture according to his idiosyncratic logic. Sometimes he liked some features of a painting that he wanted to erase and would make a drawing as a record.

He was diagnosed with pancreatic cancer in late 2016. A major operation in 2018 removed much of the pancreas, but doctors told Robins that some cancer cells were left over. She didn’t tell her husband. He continued to work – and lived fully – until his death. “All of his friends were shocked when he died because he wrote to his friends as if he was going on, asking them to send books and discuss films,” said Casimir. “He wanted to give full throttle to the end.”

Robins thinks there are hidden clues about his illness in the last few pictures. “I don’t think you could see that,” she said. “I see that sometimes. I have his diaries. I know where he wrote that this particular painting is ‘hospital’. ”Like her husband, who only titled most of his pictures with numbers, she prefers to keep these subjects a secret. “Some are memorials to friends who have passed away,” she said. “I know what he said in the diaries for the past few days, how he felt. He attributed some of this to allergies. He was allergic to tree pollen and it was spring. But looking back, I think his immune system tried to fight it. “

Three weeks before his death, Susan Dunne, then director at Pace and now with David Zwirner, visited him to select paintings for this exhibition. “He talked about being sick, but he didn’t articulate it,” she recalls. “He was in a wonderful mood and had wonderful energy. For lunch he made the most delicious Salade Niçoise I have ever tasted. And he did it methodically. “

Before her arrival, Nozkowski had hung all the pictures in the studio. They rejected some that might have been unfinished and easily agreed which ones to include. A painting, a sphere that glows in modulated lemon yellow tones and is surrounded by a black dotted and tessellated ring, and a thin outer band of colorful shapes, attracts you like a portal to the great beyond. (It is also reminiscent of the acid-colored concentric circles paintings that Edvard Munch made in the mid-1960s when he suffered from a bleeding eye.) The sense of infinity is enhanced by the way three of the painting’s four edges intersected the circular shape. Dunne liked it so much she hung it up in her office.

The oil painting, which Robins describes as Nozkowski’s last, has a completely different effect. This is arguably one of the toughest pictures he has ever taken. Three figures – or is it the angular cutouts from the tailors’ harlequin costumes? – in faded hot pastel chalks stand as guards in front of a lime green background, which has been brushed with vertical lines and which sinks down like a leaf of water running down a wall. Perhaps it’s dark creatures looming before a dubious Eden. The long-necked one on the right has a family resemblance to Francis Bacon’s terrifying “Three Studies for Figures at the Foot of a Crucifixion”.

Viewed differently, according to a characteristic trick by this masterful artist, the green surface could be a tattered curtain, through whose holes a two-tone world – unrecognizable, seductive, beautiful, malicious – is visible. Like so much in Nozkowski’s work, the painting raises puzzles that cannot be put into words. Balanced in a vibrating state of pictorial tension, these puzzles are only deepened upon prolonged viewing. They are ultimately unanswerable.