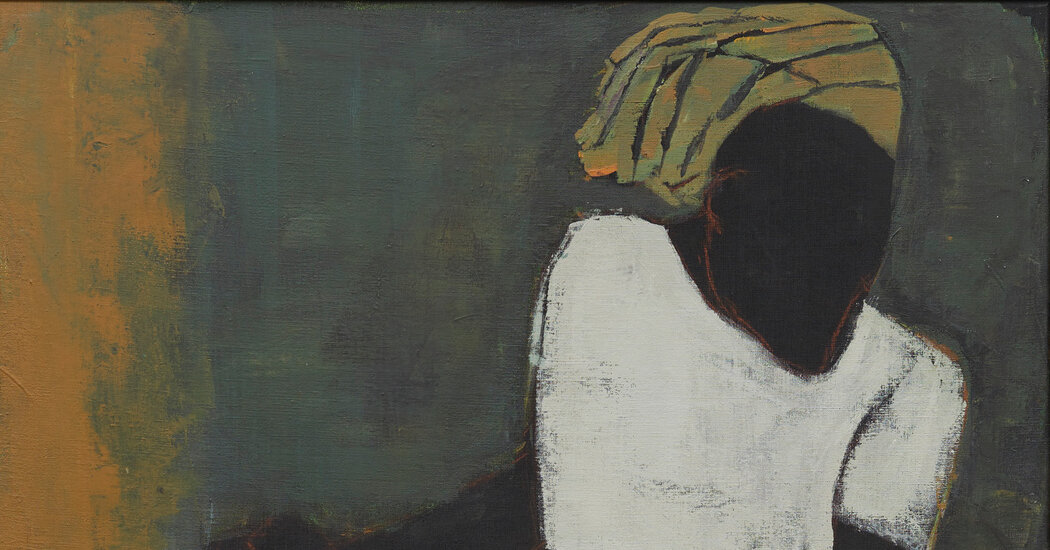 “We wear the mask”

Curating is an art form, the Mississippi-born, Brooklyn-based photographer D’Angelo Lovell Williams reminds us with “We Wear the Mask,” an exhibition of photographs he organized at Higher Pictures Generation. As if to demonstrate this, the exhibition’s press release is a nearly 14-minute video that begins with Williams dressed in an American flag print gown reciting “We Wear the Mask” by African American poet Paul Laurence Dunbar (1872-1906 ) and lazing around naked in a green summer landscape.

The video, which includes introductions from the show’s 10 artists, sets the tone for the exhibition. It recognizes the needs of black Americans, but also their achievements, resilience and joy. Trent Bozeman’s photographs celebrate his ancestors, the Gullah, off the coast of South Carolina. Photos by Nakeya Brown such as “Almost All the Way to Love” (2017) explore the politics of black beauty by arranging still lifes with hair products, curlers, hair straighteners and album covers by black singers. Keisha Scarville creates portraits with her dead mother’s clothes. Her photographs are also reminiscent of artistically staged African portraits from the 1950s and 1960s.

Other artists here document Bedford Stuyvesant and its cultural diversity, gang symbols, sportswear marketing, black-police interactions, and the words of Rev. Dr. Martin Luther King Jr. When the poem “We Wear the Mask” the exhibition is about being black after the civil war and living a kind of double existence (“No, let’s just see it while we wear the mask” ) today – and the video gives the artists a face and a voice. In addition to the Kamoinge exhibition at the Whitney Museum of American Art – this exhibition also includes Russell Frederick, a member of this workshop for black photography – “We Wear the Mask” is currently one of the best photography exhibitions in town, of course, Black History Month. MARTHA SCHWENDENER

Reggie Burrows Hodges isn’t the first artist to depict blacks using the color black, although it’s always a powerful formal choice that is visually striking and full of cultural arguments at the same time. But the way Hodges does it in his first solo show in New York at Karma gives him an extra level of magic. The trick is that he doesn’t paint people at all. Instead, he paints entire canvases in black, then fills in furniture, walls, and clothing, leaving the motifs themselves as untouched, incredibly deep silhouettes.

Most of the pictures in this exhibition capture their motifs in fleeting, ordinary moments – applying mascara, jumping over a hurdle – that stand out strangely from the otherworldly quality of their bodies. In a smaller painting like Community Concern (2020), which shows a woman in a white shirt and orange pants in the middle of a dance, you might not notice that much. Her demeanor gives you that look you might otherwise be looking for on her strange face, and it stands out against the deep green wall behind you. In a larger piece like “For the Common Good: White Ground” (2019), in which the figures border on their own endless shadows, the contrast between body and soul becomes clearer.

However, it doesn’t diminish the bodies or what they do. It is simply suggested that, however real hurdles or mascara may be, there is something even more real behind them. WILL HEINRICH

Born in China in 1986, artist He Xiangyu is perhaps best known for his 2009-12 “Cola Project”. It meant boiling 127 tons of Coca-Cola to a residue that he used as ink or hardening into lava-like pieces that he displayed as a sculpture. In this way an unusually pure form of western capitalist toxicity is transformed into an aesthetic commodity.

“Cola Project” was possibly a difficult task. “Soft Dilemma”, the artist’s first solo exhibition in the USA at Andrew Kreps, opts instead for beguiling charm in a poignant meditation on childhood, growing up and art. These themes can be found in four sculptures and a 35-minute video, but not so much in “Hard Palate,” an opulent, imposing area 19 by 17 feet with 20 individual drawings that – as beautiful as it is – is generic as an abstraction.

The “practical opacity” that greets visitors is almost irresistible: five beaten school chairs are combined with five 6-inch-high copies that match any scratch and graffiti. Confectionery contrasts with handmade; Children’s art with superlative skills; Functional object with toys. Below, “Asian Boy” is a life-size sculpture of a 10-year-old, a slender figure in solid stainless steel underwear that has been polished and then essentially fired like porcelain to achieve a stone-like, matte gray surface. The process seems to be the artist’s invention; its strikingly subtle effect gives the figure a mystery. His head is bowed so that it is not immediately apparent that his face resembles the calm face of a Chinese Buddha sculpture or a Bodhisattva – which puzzles the secret. The show is devoid of sentimentality in “Terminal 3”, a seemingly unguided two-channel documentary film that accompanies a group of predominantly Muslim students from Ethiopia and Sierra Leone through three years of study at an acrobatics school in China. You will learn the basics and then more difficult accomplishments from African and Chinese teachers. They practice and pray; eat together and walk around town and finally head to the airport terminal to return home and see how their new skills will affect their future. ROBERTA SMITH