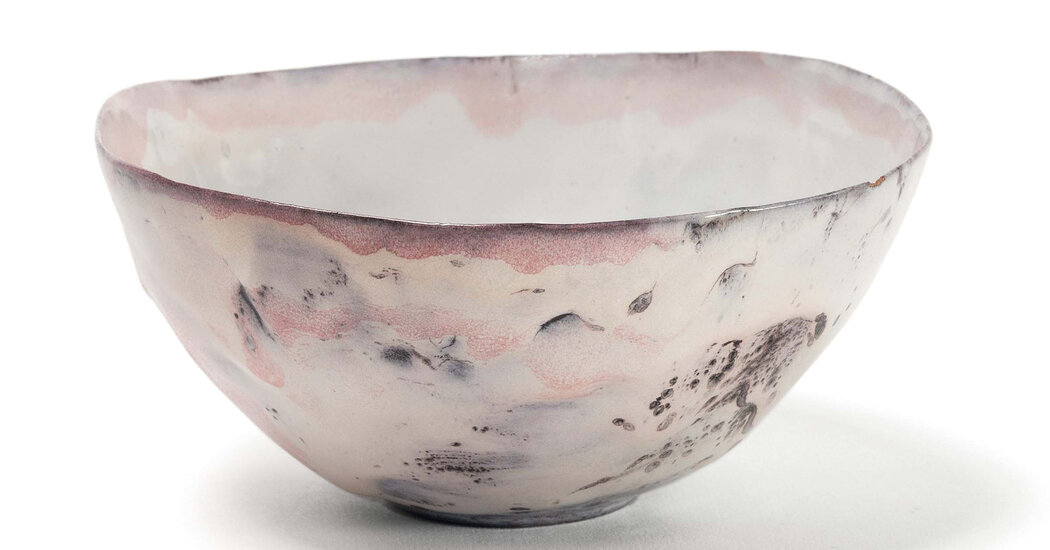 The Milanese sculptor Fausto Melotti (1901-86) is still best known for abstract, light constructions of metal filaments on which he hung thinly crushed sheets of brass and gold. (His friend, the writer Italo Calvino, called it “a score of weightless ideograms” and used it as inspiration for his novel “Invisible Cities”.) New Yorkers saw many of these outdated sculptures in 2018 at Hauser & Wirth. and another, made up of seven strips of brass tangled in meandering wires, is now on view in the Barbara Mathes Gallery on the Upper East Side, which sits over the mantelpiece. Melotti also worked in ceramics – and since everyone from MoMA curators to Brad Pitt is rediscovering the importance of ceramics, this artist’s colorful and crooked work in clay outshines the metal.

Melotti began making vases and vessels under the direction of the towering architect Gio Ponti in the late 1920s. After the Second World War, he renovated his bombed-out studio on Milan’s Via Leopardi with a large oven. For the next 15 years he only worked in ceramics and terracotta. Here at Mathes there are nine simple, thin-walled bowls, each less than 15 cm in diameter, and with unusual polychrome glazes: a liquid, mother-of-pearl-colored aquamarine that turns black, or a milky white that overlays mauve and olive-colored spots. Stranger and more sculptural: a vase from 1965, glazed in mottled blue and tied in the middle like an hourglass, with a rim wrapped around the middle part like a mushroom cap.

With their delicate wobbling movements and impure surfaces, many of Melotti’s ceramics appear to be as old as they are modern – and indeed, after the war, Italy experienced a flourishing of decorative arts, including Carlo Scarpa’s glassware and Carlo Mollino’s furniture, which gently historicized the hardness of Melotti and regionalized European modernity. The humble trust of these vases and bowls has a special appeal if you’ve been trapped inside recently, scrolling through seemingly interchangeable ceramic influencers.

In 1981, four Mexican artists, under the group name Colectivo 3 – Aarón Flores, Araceli Zúñiga, César Espinosa and Blanca Noval Vilar – called on other artists internationally to join them in response to the volatile political situation in Nicaragua The left, Sandinista-led government fought against US-backed rebels. Colectivo 3 called for the creation of a single protest artwork that consists of many individual voices. Revolution would be the topic. The Form: Work in any style that fits on a sheet of letter-size paper and mail it to you.

More than 300 artists from 43 countries accepted the call and their works make up the exhibition “Poema Colectivo Revolución” at the Institute for Studies in Latin American Art (ISLAA) on the Upper East Side, which keeps all the material in its archives. The exhibition was organized by the respected Uruguayan-born conceptualist Luis Camnitzer, who covered the walls of ISLAA’s small gallery with photocopies of the art sent by post. (The original pieces, some of which now look fragile, can be viewed in folders in the gallery.)

The post art from Dada enjoyed great popularity in the 1960s, and the 1981 project suggests both its advantages and disadvantages as a political medium. Its distribution by mail made it democratic; The targeted audience of the art world made it elitist. Some artists took it seriously; for others it was a lark; career networking opportunities for still others. Indeed, the project is most interesting – and most interesting – when viewed through a critical article written by Camnitzer that is available as a snack. In it he encounters many of the potential strengths and weaknesses that “political art” encompasses as a category and which “Poema Colectivo Revolución” embodies. He questions the viability of the genre without discarding it, and sets conditions for a debate that are just as relevant as they were 40 years ago.

After studying at progressive Black Mountain College in North Carolina (and inspiring her ex-husband Robert Rauschenberg to do the same), Susan Weil returned to New York to pursue a long career spanning a wide range of mixed media work to continue. Despite the intimate size of the JDJ-Galerie’s rustic one-room space, this current show offers a comprehensive overview of more than four decades of production by Weil, who turned 91 this month. It shows how her cunning, inventive use of the figure (especially the female figure) evolves and persists over time.

Her earliest works – spray-painted abstract compositions from the 1970s – have shapes that are reminiscent of human limbs and torso. Pieces of canvas from the 1980s and 1990s hang like strange coats on the walls. They also conjure up the body, albeit more indirectly, by evoking the folds and folds of the fabric that surround it. Two collaged grids (from 1998 and 2000) break down the dynamic movements of female nudes into a series of still images that are reminiscent of Eadweard Muybridge’s stop-motion photography.

Not to be missed: In addition to Weil’s etchings and cut-paper collages, there are four artist books that Weil made with the publisher Vincent Fitzgerald & Co. Texts by James Joyce, Gertrude Stein and the poet Rumi appear. These hand-bound volumes, which are published in editions of 25 or 50 copies, feel like deeply personal love works. If a gloved gallery owner shows you these books, all you can do is not to turn to their pages yourself.