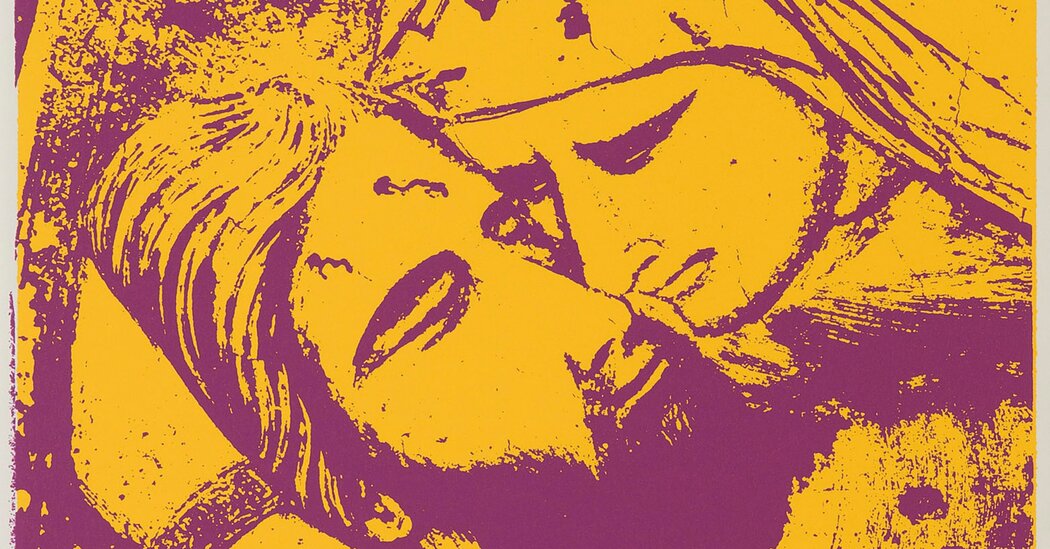 Corita Kent, also known as Sister Mary Corita, was quite famous for being a nun. She wrote an article in Newsweek in 1967 about the state of the American monastery and worked on major commercial advertising campaigns to raise funds for her order’s Immaculate Heart College in Los Angeles, where she taught art. (Kent left the Order in 1968 at the age of 50 and died in 1986.)

She was also a prolific artist. In screen-printed collages and text art, she combined her passionate interest in social justice with a kind of seriousness in language and her own pronounced credo, which you will not find anywhere, let alone in the art world. (Perhaps it could be called “in good faith”.)

“Heroes and Sheroes” at Andrew Kreps Gallery is New York’s first complete exhibition in a series by Kent from ’68 and ’69. Using found images, mostly from the news media, bold colors and often handwritten texts, Kent worked through the moral catastrophes of the decade – the assassinations of Kennedy and King, the Vietnam War. You could juxtapose a Viet Cong guerrilla who is being arrested with a sketch of a slave ship and a few lines from a Whitman poem. Or she could put a simple picture of a flower over the sentence: “Hope is the belief that there must be an ‘I’ in ‘Daisy’.” Either way, the effect is as direct and devastating as a blow with a sledgehammer.

The whole show, which is accompanied by a generous compilation of further text and media art, is extraordinary. But the piece I kept coming back to was Pieta 1969, a mardi grass-colored study of Mary weighing the lifeless body of Jesus over a letter one of Kent’s students wrote to her about Robert Kennedy. “It’s so easy to fall apart when you’re surrounded by destruction,” noted the student. “Now I can see what you meant when you said we have to create something. That’s the only thing we can do. “

The South African artist Igshaan Adams grew up in the twilight of apartheid in the working-class township of Bonteheuwel near Cape Town. Born a Muslim and raised by Christian grandparents, Adams, the mixed race, interweaves visual elements of these traditions in dazzling combinations that illuminate their interconnected stories.

For his first solo exhibition at Casey Kaplan Gallery, “Veld Wen” (“Gaining Ground” in Afrikaans), Adams presents 10 richly structured tapestries and nest-like wire sculptures that, like the shimmering assemblages of El Anatsui, contain organic and synthetic flotsam, mate, including shells, stones and nylon rope. Loosely pinned to the gallery walls, the tapestries have abstract geometric patterns that often look like maps, such as the archipelago design of “Nagtreis op n Vliende Perd (a night journey on a winged horse)” from 2021 with its midnight blue expanse peppered with bright stars.

The inspiration for these patterns is the linoleum floors in a typical Bonteheuwel house. Worn and torn over time, the soils merge in sedimented layers and produce palimpsests, which Adams has refined into warp and weft and covered with glittering metal chains and glass beads. Between these tapestries are the knotted wire sculptures, which are hung like tumbleweeds in the gallery. They also trace a longer story, alluding to the clouds of dust that the Nama people, including the artist’s grandparents, made during a traditional festival performance, the so-called Rieldans. Adams invites viewers to absorb the craftsmanship and provenance of his work simultaneously, demonstrating that an artist can successfully fuse national and personal narratives without reducing the complexity of either.

With a tropical storm recently causing flooding on the east coast and a drought and heat wave in the west, it is more topical than ever to think about climate change. Three solo exhibitions at Smack Mellon are on the subject, my favorite of which, by Tammy Nguyen, used painting and printmaking to emphasize how intertwined it is with capitalism and geopolitics.

Nguyen’s exhibition is entitled “Freehold” based on Forest City, a real estate project that is being built on four artificial islands in Malaysia. Forest City markets itself as a technologically advanced, environmentally friendly tax-free capitalist utopia. When the artist visited in 2019, a saleswoman said: “No climate change here”.

Nguyen designed an unofficial flag for Forest City with a white circle – the sun – and 12 blue and green stripes that represent land and water in harmony. The flag anchors “Freehold” as a symbol of artificial, almost parodic calm in contrast to the carefully orchestrated and wonderfully captivating visual chaos in Nguyen’s remaining works.

Figure and ground can hardly be distinguished in Nguyen’s prints and paintings. Instead, she creates a wild network of images and techniques. In “Seasons of Revolution 1 – 4” the flag is jumbled with vegetation and various flora and fauna associated with leisure, such as shrimp; another series features archetypes: a Marlboro man, a spa-going Medusa, and a King Kong-like monkey. In all the pieces different elements compete for priority, but it is the plants – viewed more traditionally as backdrops – that seem to win. Nguyen says there is no such thing as “no climate change,” and if we try to defeat nature, we will end up surrendering to it.