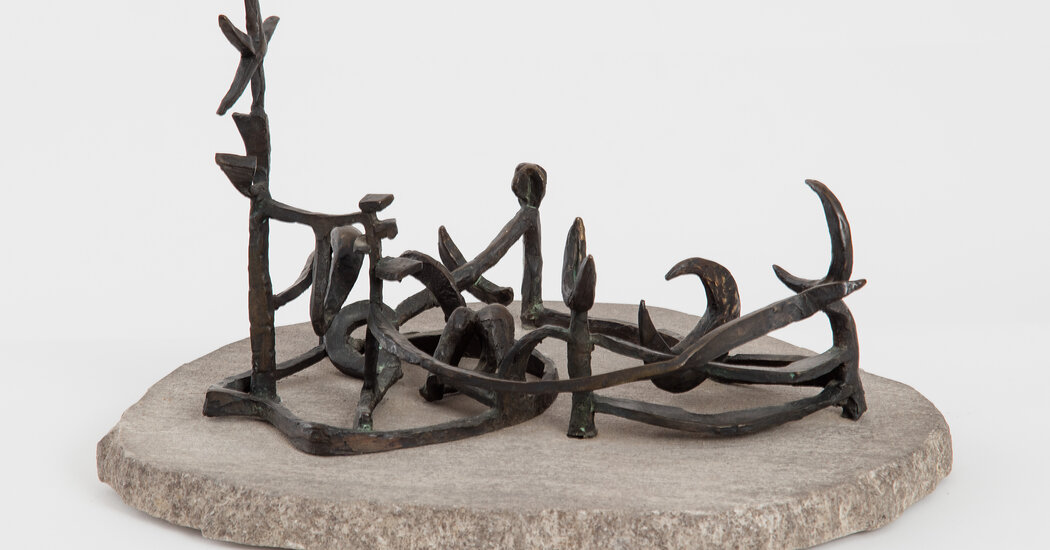 Dorothy Dehner
“A future that we are beginning to feel”

This beguiling solo exhibition of four sculptures and nine works on paper by the artist Dorothy Dehner (1901-1994) is contextualized by a fascinating, albeit fragmentary, group exhibition entitled “A Future We Begin to Feel: Women Artists 1921-1971”.

As an active artist since 1925, Dehner did not begin to show her work until 1950, after the end of her 23-year marriage to the sculptor David Smith, who saw no need for another sculptor in the family. The woodwork is the main attraction; Created in the mid-1970s, they nod to Brancusi and Giacometti, but retain their individuality. Even better is a small bronze beauty entitled “Garden at Night”, which has a lightness that Smith seldom achieved, merging into constellations on the page.

The group exhibition “A Future” presents paintings, collages and watercolors mostly from the 1950s and 60s by 22 artists (including Dehner). Most were born around 1900 and worked abstractly in the United States. An interesting outlier is the Russian constructivist Natalia Goncharova (1881-1962), whose village scene around 1950 shows a softened version of the style of rayonism, a Russian form of cubo-futurism. Another surprise is the work of the Turkish artist Fahrelnissa Zeid (1901-91): abstract paintings on paper, the bright colors of which peer through networks of black lines drawn with ink. There’s plenty to see here, including uncharacteristic works by Alma Thomas, Charlotte Park, Sonja Sekula, Esphyr Slobodkina, and Eileen Agars’ elegant amalgamation of surrealism and geometry. These two shows go well together: The Dehner works remind us that each piece in the group show represents a career that deserves greater visibility. (Rosenberg & Co. will be closed from August 28th to September 7th)

Spend enough time on social media these days and photographic self-portraits can seem mundane. The group exhibition “Mirror, Mirror” is a refutation and a warning that this remains a fruitful, fascinating art form.

Take, for example, “Guise Like Me” (2021) by artist Tommy Kha. On the largest of three pictures, something that looks like a section of Kha is lying with its back to the camera and holding a mask of its face. In a smaller photo, the face reappears over the shoulder of Kha’s mother, who seems to be haunted by an old picture. Kha uses playful tricks to arrive at an emotional truth: the broken stratification of identity.

Ilona Szwarc takes a similar approach, with images showing her doppelganger transforming into a werewolf-like creature. The woman appears in colorful, lush surroundings, and it is unclear whether she will initiate the transformation or if it will happen to her. In “She was unsexed as a doll” (2019), the woman’s expression represents a kind of challenge: Is that a nightmare or a fairy tale?

Paul Mpagi Sepuya’s photographs are more real, but not more straightforward. He catches himself and friends in the studio, often naked and intertwined, with faces obscured or obscured by cameras. There is a push-pull between casualness and formality, that which is hidden and shown – a tension that Whitney Hubbs also seems to strive for, although the two pieces lack their conceptual basis.

What makes these works so striking is that they both hold back and reveal. They dispute the legibility often associated with photography (and selfies) and instead offer cleverly staged puzzles.

Heavy, brooding landscapes spread in the 13 most recent paintings by Markus Lüpertz in the Upper East Side Gallery by Michael Werner. The reference to European art and history and literature is obvious: its wobbly trees, the smeared sky and the unnatural light pay homage to the post-impressionist art movement in France. The mood of the paintings is reminiscent of Paul Gauguin’s oeuvre – especially his work in Tahiti, which Lüpertz makes particularly noticeable by including a recurring female figure similar to that in Gauguin’s gestures; She is also present in other Lüpertz works such as “Nymphe Märkisch”, “Idylle” and “Fisher and Nymphe”, always with her back to the viewer. Mythological figures from Greek legends such as Jason also appear in paintings such as “Jason’s Farewell”.

But Lüpertz quickly turns on his own path after paying the tribute. Unlike Gauguin, who worked with bright, lively colors that evoke a sometimes problematic exoticism, Lüpertz uses colors that are dark and powerful and suggest longings. In Gauguin he sheds his smooth skin and hugs the people in his pictures with a rocky, block-like body structure, as if they were sculptures that interrupt the landscape.

The hand of the meanwhile 80-year-old Lüpertz is definitely strong, well trained and experienced – he skilfully transports his influences into his own shaped landscape, his own universe. One wonders: In what atmosphere did this painter work? Has his work as a sculptor influenced his choice of those bold lines and thick spots in creating people with stony flesh? Why is it evening in all the pictures?

In 2010, Lüpertz ‘“Pastoral Thoughts” were shown in this gallery, which are based on themes such as history, abstraction and his characteristic landscape motifs. Decades later, in “Recent Paintings”, he abandons abstraction, but moves further into history. It’s like dreaming backwards – albeit clearer now, turning back to what it might feel like in the beginning to be in the Garden of Eden.