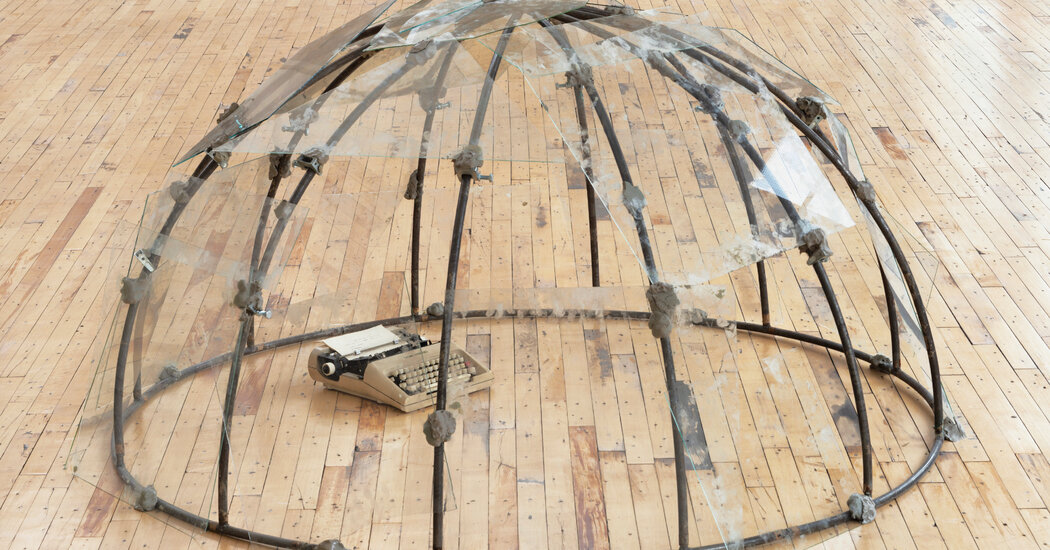 Mario Merz’s sculptural installations look a little different from some of the austere minimalist and land art works that make up the core of Dia Beacon’s collection. On the one hand, Merz’s sculptures use organic materials such as fresh fruit, vegetables and twigs instead of industrial materials such as steel. The Merz Show, however, artfully blends important 20th-century European movements with American ones, and shows how his ideas often overlapped with some of Slide’s long-term stalwarts.

The Italian artist Merz (1925-2003) began drawing in 1945 when he was imprisoned for his activities with an anti-fascist group. In the late 1960s, he got involved with Arte Povera (literally “poor art”), which advocated the use of everyday materials. You can see it in his sculptures with branches, hay and string. Merz was also interested in ancient and elementary forms such as tables and igloos as well as in the Fibonacci sequence, in which each number corresponds to the sum of the two preceding ones.

An early igloo: “Is space bent or straight?” (1973) at Dia: Beacon is made of glass supported by a metal armature and contains a typewriter with an ad hoc poem. Later, larger igloos like “8, 5, 3” from 1985 contain stacks of twigs and neon words. “Tavola a spirale (Spiral Table)” (1982) serves as a kind of Fibonacci-inspired banquet with fruit and vegetables, displayed next to a small beeswax violin carved by Merz’s wife, the artist Marisa Merz.

Then there are the numbers. You may be missing out on almost “Progressione di Fibonacci” (1979/2019), a series of neon numerals that appear on the cross members just below the ceiling and run the length of the gallery. They’re the simplest works on the show, but they connect Merz’s practice with other slide artists – Dan Flavin’s fluorescent sculptures or the rhythm of Carl Craig’s Detroit techno music in the basement – as well as other artists interested in the Fibonacci series, like Donald Judd, Dorothea Rockburne and Sol LeWitt. Many artists during this period were obsessed with math, systems, information theory, and cybernetics, and made art based on series or permutations. Merz’s interpretation of Fibonacci’s numbers, which stretched to infinity, also hinted at a utopian approach that combines art with greater forces like science, history, and nature.

“Everybody Dies!”, The newest high profile group show at Chinatown gallery Carriage Trade, takes its title from its central piece, a short video by Nuotama Bodomo, a New York-based Ghanaian filmmaker. In it, four black children are asked impossible questions in a low rent game show sponsored by Newport Menthol Cigarettes. If they inevitably answer incorrectly, they will be pushed through a yawning door marked “DEATH”.

Although it’s only nine minutes long, the video alternates between morbid humor and hysterical despair, and the exhibition follows suit. A stack of untitled posters in one piece by artist Felix Gonzalez-Torres reproduces a 1989 Time Magazine image of the American gun violence epidemic and its disproportionate impact on people with color. (Take one – they’re meant to be refilled.)

Color samples made of patterned black fabric from the 19th century for mourning dresses are whimsical; A drawing of John F. Kennedy’s assassination by artist John Schabel in third grade is shocking. and a mock coffin expropriated by an Oddfellows lodge looks strange in this context. A series of prints made by Melchior Grossek after World War I and the 1918 pandemic influenza show death as eerie but joyful, amused by its own terrible mood.

Carriage Trade artist and curator Peter Scott started planning “Everybody Dies!” over a year ago, but it couldn’t be more relevant – not just because of its focus on mortality and racial injustice, but because it so adeptly evokes a mind that can’t understand what’s right in front of it.

Figurative painting seems to be everywhere at times, as its two-decade renaissance shows no signs of deterioration. Mernet Larsen has been making stylized and mysterious representational paintings since the beginning of the current wave, but only made her New York gallery debut in 2012 (at the age of 72). It is gratifying to see that it continues to fall due.

The new works in the current exhibition (which can be seen in the gallery and online) originate from the suprematist and constructivist compositions of the Russian artist El Lissitzky. Ms. Larsen takes Lissitzky’s abstract forms and transforms them into realistic paintings that are filled with block-like, geometric figures that have strange spatial relationships to each other and to the world around them. The resulting scenes are cryptic, but also funny (a rooster is handed over to a monk), threatening (a man on the beach with a gun), or cosmic (an astronaut swimming in front of a planet). She enhances the feeling of creepiness by using a muted color palette and mixing perspectives.

An excellent example, “Intersection (after El Lissitzky)” (2020), shows a man in a wheelchair walking a dog. The pair is as angular as the sidewalk that runs beneath them and protrudes as a flat background. From the title intersection, a more structured scene of a truck driving down a freeway and birds flying over a field appears to appear through beams of refracted light. The man watches it almost like a painting. For the gallery owner, the whole worldly moment becomes unfamiliar and metaphysical, like a look at reality that explodes from within.