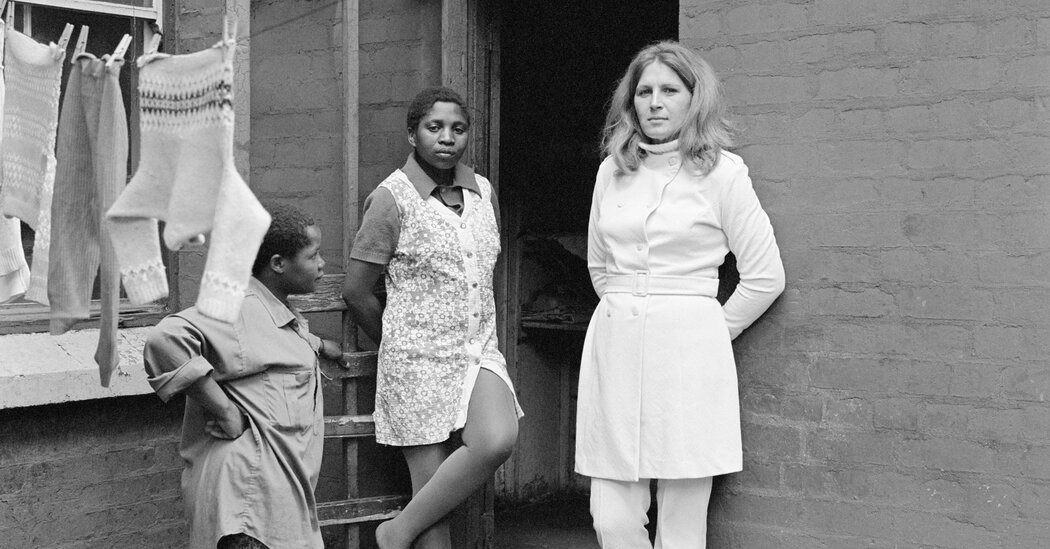 David Goldblatt, the important South African photographer who died in 2018, began documenting his society when apartheid intensified in the late 1950s. But instead of photographing protest and repression, he took pictures of South Africans simply living in the midst of the absurd matrix of social control – built on pseudosciences, a distorted Calvinism and bureaucracy – with which the regime tried to impose racial segregation.

With access but empathy, Goldblatt photographed African matrons, Indian shopkeepers and black miners in the shafts and tore from the earth the resources that fueled their oppression. He photographed the area – living rooms, concrete churches and precarious huts, communities that are on the verge of death due to eviction, and the meager consequences. Because his work was honest, it didn’t have to be “political” to have a policy.

“David Goldblatt: Strange Instrument” in the Pace Gallery presents 45 images from the early 1960s to the late 1980s in the then preferred black and white gold leaf. They touch on its main themes and form an elegant introduction for new viewers. The added value of the show lies in the selection of Zanele Muholi, the photographer, self-described visual activist and Goldblatt mentee, who selected the works and largely grouped them into pairs. The headings – “About calm”, “About position and expression”, “About women, to be seen” – indicate undercurrents that Goldblatt may not necessarily have recognized even when looking at his own archive.

Muholi, born 1972, Black, queer, got close to Goldblatt while studying at the Market Photo Workshop, which Goldblatt founded in Johannesburg. Even when apartheid was gone, their positions in a country ravaged by residual trauma and plagued by inequality made their friendship a two-way experiment in which learning flowed. Muholi’s selection draws attention to Goldblatt’s privileges, but gently; the contrast between Goldblatt’s detailed captions, so valuable to historical record, and the number of unnamed black motifs; even speculative on sexual fluidity touches. It’s a great and loving exercise.

For almost 10 years, the young artist from Brooklyn, Ebecho Muslimova, has been creating a naked, obese alter ego named Fatebe – “fat Ebe” – through every exhibitionist performance that she can think of. In “Scenes in the Sublevel”, a series of 10 specially commissioned portraits on door-sized panels made of Dibond aluminum, it is larger than ever and more lush and shows itself in elaborate fantasy views in the basement of the drawing center.

In two neighboring boards, Fatebe appears on two red sofas, swallows one and has sex with the other. In another scene she is dragging puddles of urine through endless corridors and a third is superimposed on her at the far end of a beautifully painted horse. Her eyes are egg-shaped and innocent as always, and her own ponytail is reminiscent of the horse.

On her surface, Fatebe seems to suggest that female bodies, female sexuality, and appetite in general are ridiculous at best. The fact that her escapades take place in the very room where the works are hung – look for drawings of the basement track lighting on most of the panels – reminds you that it is the artist’s job these days to paint the white walls off to add some color to New York’s art institutions, regardless of whether the artist in question, like Muslimova, is an immigrant from the Russian Republic of Dagestan or not. The drawings might even make you think that there is something awkward and sinful about the simple joys of bright color and curved line.

But because everything comes with a pretty big wink, you can take it or leave it. You can think seriously about depictions of women in American visual culture, the treatment of women artists, and your own involvement as a visitor in the structural problems of the art world. Or you just look at the pictures and have fun.

John Feodorov’s “Assimilations” exhibition at the CUE Art Foundation tells what the Native Americans have lost culturally under European colonization: language, religion and history. His raw, faux-naive, and elegantly composed paintings are the best works in the exhibition. Enlarged family photos and an installation with a Bible translated into Navajo, as well as a recording of the artist’s mother and grandfather singing Navajo songs, add to the overall devastating effect.

Painted canvases feature pitched roof houses, paved roads, and people forcibly separated from their ancestors, as well as collaged photos and prints of tourist shops, Christian hymn books in Navajo, and products like Spam – even a bird’s wing attached to a painting. The words “I can’t speak my mother’s language” (2018) are painted on the underside of a canvas. “Living Under a White Rainbow” (2020) has an inverted American flag.

The Collectibles series uses the simple device of vintage family photos taken between the 1940s and 1980s. The text comes from ads that objectively describe Native American culture. “You will marvel at the symbolism of the Indian style”, says “Collectibles # 1” (2007), while “Collectibles # 10” (2008) says: “A great work of art with which you share a moment of great beauty and beauty can.” Indian style spirit. “

The latter of course documents both the position of the Indian artist who participates in the institutionalized art world and everyone else – especially the white Europeans – who look at indigenous objects and rituals. Feodorov, who grew up half Navajo (Diné) and half white in the Los Angeles suburbs, occupies both positions, and his work effectively highlights the difficulty of trying to preserve tradition and assimilate at the same time.