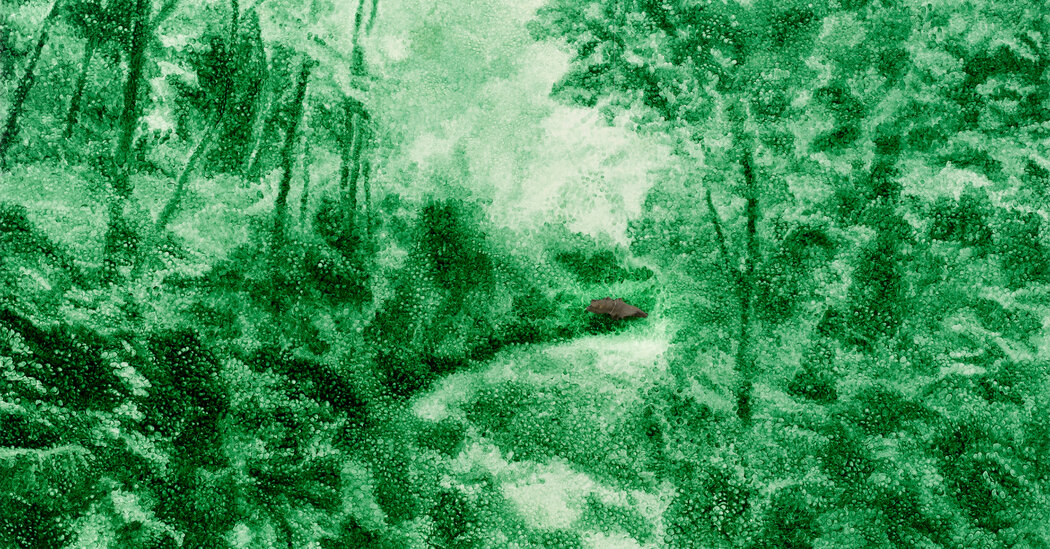 Of all the Italian arte povera (impoverished art) artists, 74-year-old Giuseppe Penone has possibly created the richest, most accessible and enduring work. The idea comes up in his exciting exhibition of pieces from the mid-2010s at the Marian Goodman Gallery. Of course, the credit is not everything. From the beginning, Penone’s work was an elaborate collaboration with nature – especially with trees and their various processes of incremental growth, which he compares with artistic ones.

First, a haunting woody green emanates from six large paintings that are inspired by Walt Whitman’s “Leaves of Grass”. The scenes of dense, overgrown foliage are painted entirely with the artist’s fingertips. The neo-pointillist, neo-rococo-like fluffiness has a wonderful molecular energy that is fun, accurate and seductive at the same time. In the center of each canvas hangs a small lump of baked clay from various parts of the United States. Everyone gives us the hand of the artist again, this time he presses the clay in his fist, whereby the fingerprints are particularly easy to read.

As the show progresses, you will come across fingertip drawings of plants collaged with the frottage abrasion of individual leaves, as well as a sculpture and a large piece of wall made of fired, fist-pressed clay. Also, two small tree trunks carved into white marble streams of bronze apparently formed entirely with the thumbs. Nature literally bleeds for human sins.

According to the paintings, the tour de force of the show is “Artemide”, a bronze column made up of two casts of one half of an evergreen trunk that is nearly three meters high. One cast shows the rough exterior of the trunk, which is littered with stumps of branches. The other cast shows that it was sheared from bark. This version is a smoother, leaner inner layer with matching stubs and is bursting with hints of the human body. The distance between natural facts and artistic allegory is decreasing. The piece is an astonishingly accurate reminder of Artemis, the goddess of chastity, young girls, women and childbirth, among other things. ROBERTA SMITH

Art that focuses on land or the environment and works in collectives are two practices that emerged from the tumult of the 1960s. The group known as the Boyle Family included both of them, as you can see from their giant “Earth probes” posted on the walls in “Nothing More Radical Than The Facts” in Luhring Augustine. The 11 works here were created between 1969 and 1990 by British artists Mark Boyle and his wife Joan Hills and their two children Sebastian and Georgia Boyle.

Instead of creating colossal works in a distant location, like Robert Smithson’s “Spiral Jetty” (1970) or Nancy Holt’s “Sun Tunnels” (1973-76) – both in remote areas of Utah – Boyle Family made objects in which should be galleries. The square and rectangular works represent parcels from different parts of the world, often selected by random methods, e.g. B. by throwing arrows at a map. Here you can see replicas of a “Tidal Sand Study, Camber” (2003-05), a striped “Study of a Potato Field” (1987) or the urban gutter in “Study From the Westminster Series With Glass Pavement Light” (1987) ) made mainly of resin and fiberglass and some samples from the construction site, such as a pebble or aluminum beverage container.

The point and the payout? If you look at a small part of the newly created land in a gallery, you will become aware of all the places you pass every day and ignore subtleties and quirks. As with any good art, you get the “geothermal probes” to focus. They also change the way you think and make you leave the gallery with a refreshing understanding and interest in environments in other parts of the world. MARTHA SCHWENDENER

In an unusually personal advertising publication for her show “There is the Air”, the Chicago-born painter Clare Grill, who now lives and works in Queens, writes about miscarriages, grief and the meaning of naming. A friend suggests that naming a baby the artist lost will help her let go of it. Your pictures will only get their concise one-word titles when they are finished.

Grill can work on a particular piece for years, adding color, and then scraping it off again on an impromptu journey to some sort of monochrome broken up by a rain of contrasting markings. The markings themselves can vary widely, from simple brushstrokes to shapes that look like twigs, Roman letters, or glowing gas balls. In “Vene”, six broad lines of color float like flower petals or a deconstructed Chinese character on a bluish-black background at night. Grill works horizontally on her paintings and in the muted purple “trumpet” she has incorporated a shadow that happened to cross the canvas into the composition. All nine paintings in the exhibition have a wafer-thin surface depth that made me think of dust motifs floating in a pillar of light.

“These paintings are not really about grief or loss or anything,” she writes, “but they were made in and with it.” She talks about her own losses and the lost year we all just had, but she could also talk about the creative process. Any painting that gets a name is shadowed by countless others who haven’t. WILL HEINRICH