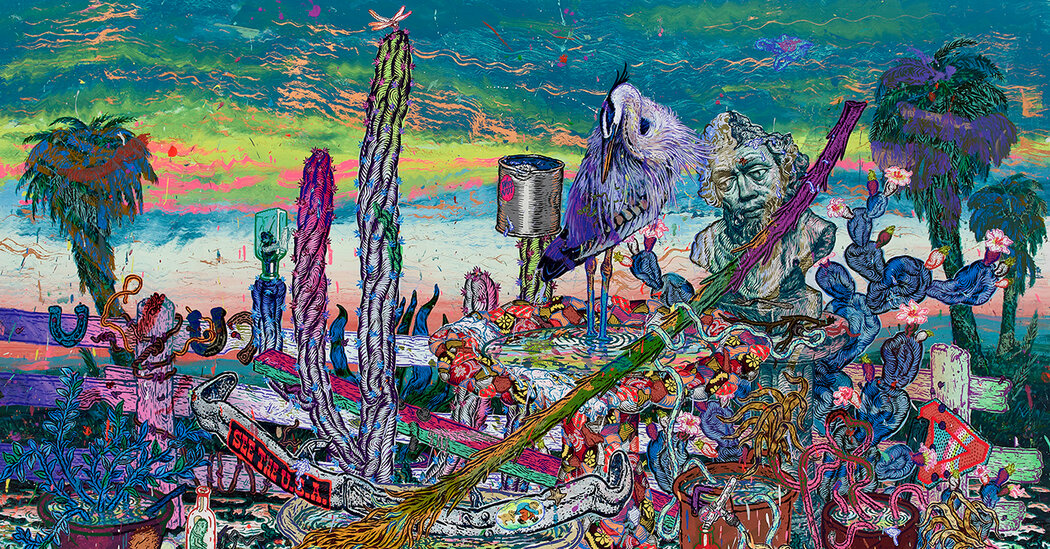 For those who find art galleries interesting but intimidating, the loch is an excellent place to test the water. Especially now when the gallery’s annual themed group show – traditionally a crowded, over-the-top affair – is in full swing, along with the fearless sensibility of its founder and executive, Kathy Grayson.

Grayson prefers art of instant attraction, be it in terms of surprising subjects, palpable colors, or dazzling, inventive, sometimes digital techniques – or all of the above. Their view seems to be that the visual arts are on a collision course with popular culture and are sure to be animated.

The theme of this year’s extravaganza is still life and its traditional subtext – the transience of life and its inevitable descent into decay and death – is visible everywhere. On the first wall of the exhibition, visitors are greeted by Robert Lazzarini’s 2000 sculpture of an anamorphic skull and Aurel Schmidt’s lush, hyper-real flower arrangement with colored pencil and fat bow ties.

The show’s 60 or so artists are mainly painters, including Fernando Botero, represented by a watercolor of a characteristically corpulent blue coffee pot; young elders such as Chris Johanson, Barry McGee, and Holly Coulis; and emerging artists like Amanda Baldwin, Molly Greene, Mark Posey and Pedro Pedro.

First-time artists in New York include British surrealist Ivan Seal (known for his album covers for experimental musician Leyland James Kirby), who is represented by two emerging paintings of fresh and less fresh bouquets of crispy-surfaced flowers ;; and Jon Young, who contributes a large iridescent fabric pillow relief of a silver armadillo against pale green that looks like it could serve a double purpose as a headboard. This year, Grayson selected wall treatments that alternate brutalist blocks of artificial concrete with floor-to-ceiling black and white photo murals of forest scenes. Initially benign, these become “Blair Witch” as the arts become more environmentally conscious. In his inimitable cartoon style, Taylor McKimens expands the still life into a glittering dump of American rubbish called “See the USA”.

Amsterdam-based artist Remy Jungerman was born in Suriname, the former Dutch colony in South America. Its maternal roots are in the maroon trunks, descendants of Africans who escaped enslavement three centuries ago to form free communities in the rainforest. In his art, Jungerman relates this cultural heritage – with its objects, rituals, cosmology – to modernity, especially to the Dutch variety, which Piet Mondrian and the de Stijl movement embody with their color blocks and clear geometries.

Over the past two decades, Jungerman, who was shown in the Dutch pavilion at the Venice Biennale 2019, has evolved from large-format sculptural installations that functioned through the accumulation of objects to more introspective individual pieces. His approach is almost painterly now – except that the panels in Brilliant Corners, his fascinating exhibition at the Fridman Gallery downtown, aren’t paintings; Instead, they are modest, checkered fabrics that the artist glues onto wooden plank and then covers with white kaolin clay before cutting lines that reveal discs of the color underneath. The cloth and kaolin are characteristic of the maroon culture, while the markings create scarification.

Jungerman studied mechanical engineering, and the architectural disposition in his art remains evident – in the grid geometry of the panel work and also in horizontal wooden sculptures to which he adds fabric, beads, a clay gin bottle, and nails. The overall shape resembles a ship at sea or an urban sketch, while the details are sacramental and syncretistic.

“Visiting Deities” – a film by the anthropologist HUE Thoden van Velzen from 1962 that documents a maroon ceremony – can be seen in the basement. It provides useful references, even if it reminds us that ethnographic counterpoint has always lurked beneath modernism.

When you stand at one end of Florian Meisenberg’s exhibition “A Story Is Always Told in Two Ears” in the Simone Subal Gallery, you will see a series of paintings that are at 90 degrees to the walls of the gallery and a candy colored mural covering the gallery window. If you’re at the other end of the room, you’ll see the back of the same painting – and a whole different show. This sums up Meisenberg’s approach: he treats painting as a device, albeit a nifty one, to remind us that everything can be viewed from different perspectives.

A yellow painting of a grid going back into space starting in 2021 and essentially describing how linear perspective works in painting to create a sense of depth has a long title in the form of queries. It begins with “Il grotto fiori (Why is sand so comfortable everywhere? How does sand adhere so well to several surface structures?).” Other paintings show roughly painted birds, fantastic creatures, abstract blobs and vegetable forms in front of or behind a lattice fence or in the mythical Tibetan bardo, a transition period between death and rebirth.

“This time of the bardo is believed to be a time of vulnerability,” Meisenberg explains in an accompanying zine that you can view online. However, this state of vulnerability could also be applied to making or viewing new and otherworldly paintings like Meisenbergs – or to wandering around the world in later stages of a pandemic.