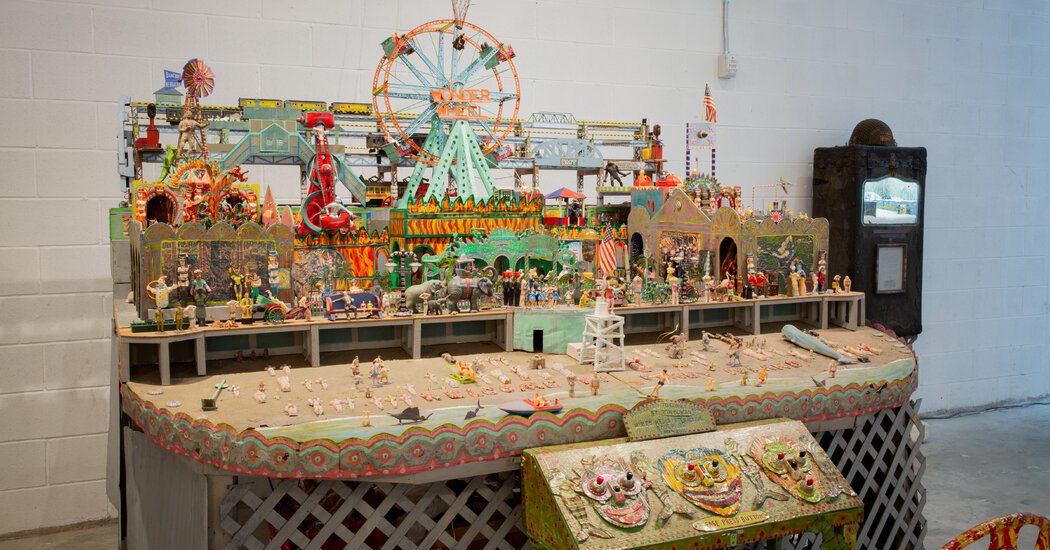 As befits the ongoing recovery from the pandemic, “Super-Rough” is a slim table version of the Outsider Art Fair. Selected by the Japanese artist Takashi Murakami in collaboration with the fair owner Andrew Edlin, this year’s version is media-specific: Everything is sculpture, plus a few wall reliefs. Most of his 250 works crowd on a waist-high pedestal that is 18 meters long and 7 meters in diameter. Kambel Smith’s large painted cardboard model of the Capitol Building and Tom Duncan’s miniaturized mechanized panorama of Coney Island have been given their own floor space.

The result is almost overwhelming, like the cream skimmed off and presented undiluted from an average art fair, no stalls or aisles and not much walking. The 28 participating dealers mostly come from the New York area; the artists themselves come from near and far.

On the plinth, things are loosely arranged by material. In the front you can see a crowd of imposing wood carvings, like Moses Ogden’s haunting portrait bust, or painted, like the totem by Gaston Chaissac. Halfway there is a nest of textile-oriented work, especially Judith Scott’s excellent piece of wrapped yarn; Yumiko Kawai’s brightly embroidered hills; and Ryuji Nomoto’s ventilated landscapes made of wafer-thin threads – actually strands of glue. Then the carved stone seems heralded by the imaginative creatures of Alikan Abdollahi, which are paper mache painted with trompe l’oeil. Chomo (Roger Chomeaux) is reminiscent of stone with painted, plastered concrete. The truth about the materials triumphs in four wild, beautifully carved limestone or alabaster gargoyle-like heads by Jerry Torre, known as the marble faun. Ceramic makes itself felt with the textured creatures of Shinichi Sawada; Alan Constables glazed cameras and Seyni Awa Camara’s two-headed being in unglazed terracotta.

No wonder, the largest and most unruly category is the assemblage. It starts with the blunt finds of Lonnie Holley and Hawkins Bolden and extends to Paul Amar’s radiant amalgamation of faces and altarpieces in painted shells – reminiscent of miniature carnival floats. A similar, but rather improvisational, intricacy is found in a group of mementos covered with coins and so on and the lavishly dressed women of Sylvain and Ghyslaine Staëlens. How much they are amazed at here.

With Simone Subal, two charming new videos by Frank Heath seem to point to little-known corners of culture in the simplest possible way.

Heath’s 23-minute “Crypts of Civilization” begins with telling us about a room-sized time capsule that has lived at Oglethorpe University in Atlanta since 1940. Filled with a selection of records and objects from (mostly white, Christian, American) civilization, it is said to remain sealed until the year 8113. The story of the Oglethorpe Vault is told by Paul Hudson, co-founder of the International Time Capsule Society, who continues to talk about other capsules he knows.

Heath’s video has the look and appeal of a good documentary, with one big difference: because it’s presented as art, there is a temptation to question every “fact” it offers. Are the clips from the 1930s films that appear in “Crypts” the same clips that Oglethorpe put in his sealed vault? How could Heath know about them or get access to them? Is the film’s narrator really Hudson, the co-founder of TCS, or is he a dedicated actor? Are we witnesses to real truth-finding or is this a Borgesian fiction blown up as truth? Once the everyday is exhibited as art, we can’t trust what it’s up to: Who wants to urinate in Marcel Duchamp’s “Fountain”?

The other video on Subal, titled “Last Will and Testament,” suggests that Heath may not always feel the need to be honest. It presents a conversation between Heath and a lawyer in which the artist asks for advice on how to organize the disposal of his corpses using any of the 13 methods he knows, from cannibalism to burial at sea. Heath’s funeral wishes are so unlikely that one can guess that in everything he does, he is less a master of facts and more of dry comedy.

What else do objects have to give when they have met our needs and desires? This question is the focus of the new exhibition “I Have Wasted My Life” by the Canadian sculptor Liz Magor, which gives her sluggish creations a disarming but irresistible charm.

For over four decades, Magor has been taking stock of the material world and rearranging its trappings in eerie combinations that point to the silent, often emotional bonds that form between people and the matter that fills their lives. Her work has a strong ecological bias, and in recent years she has walked a fine line between the mordant and the macabre, creating installations that show off unsettling hybrid combinations of stuffed animals sewn together alongside found items like duffle coats, blankets, Ikea tables, feature and Workbenches.

These prefabricated workbenches are the fittings of Magor’s latest work and serve as staging devices on which shaggy faux fur bolts and large silicone animal sculptures (a back stork, a lying giraffe) are planked. There is so much rubble on the shelves of these benches, as in “Float” (2021): dirty wax paper and used coffee cups, clusters of small seashells and stones – once useful objects that no longer serve their purpose. Around these strange tableaus are replicas of weathered cardboard made of polymerized plaster of paris and cardboard that lean against the gallery walls and appear next to the ephemera that make up Magor’s clever arrangements.

If the atmosphere of this exhibition is pale rather than engaging, it speaks of the collective exhaustion that pervades even our lifeless objects, all of which are destined to be thrown away, forgotten and replaced. The attractive thing about Magor’s configurations, however, is how they exclude our tendency to shape – or destroy – our surroundings as we wish.