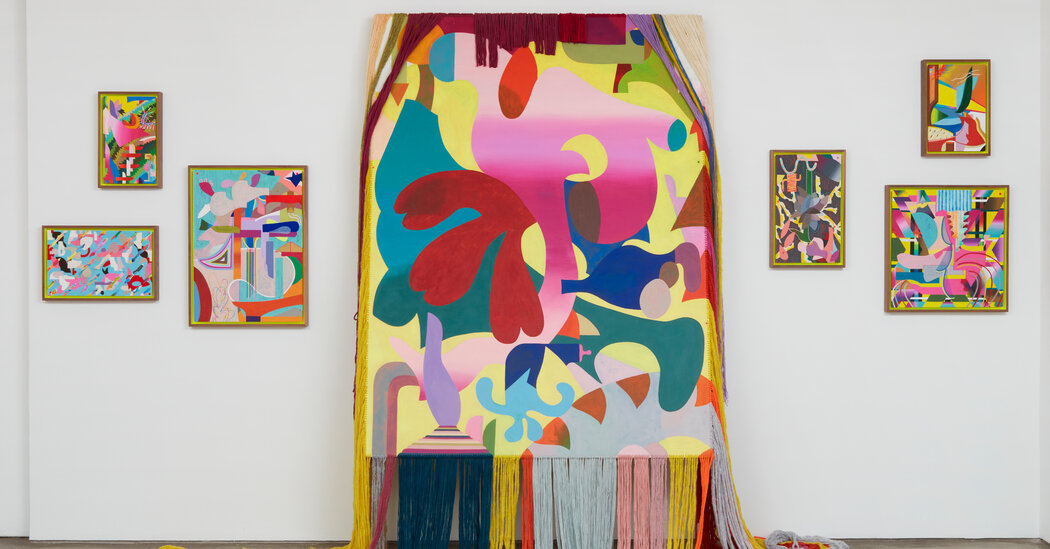 It’s been seven years since the duo called Assume Vivid Astro Focus had a show in New York. But this exuberant comeback effort “Hairy What? Hairy how? ”With Tibor de Nagy, is also a solo debut. His four large, semi-abstract paintings and a painted table – all elaborately fringed with woolen thread and surrounded by numerous smaller, unfringed works – are the work of the Brazilian artist Eli Sudbrack, one half of Assume Vivid Astro Focus. He founded it in New York in 2001 with Christophe Hamaide-Pierson, a French artist. Nowadays the couple works as independently as together, but always under the name of the collective. This confuses, but makes sense: Both sensibilities are rooted in the hallucinatory, multistylistic, multimedia environments they invented around the world for almost two decades.

The extravagant fringes expand the paintings, flowing to the floor from all four sides, evoking handicrafts, fashion, dance, ritual objects and exaggerated interior decoration. The yarn always matches the infectious palette of penetrating compositions – a mixture of Walt Disney, Magic Realism and South American abstraction that somehow shines with freshness. The shapes can be solid color or graduated and faded to white, like on the silver (or computer) screen. The transitions between color and shape cause sudden pockets of space and cloud-like floating. In other places, parts of the body are more than indicated. The show is reminiscent of the overstimulation of past environments of Assume Vivid Astro Focus. Compressed in this jewelery box, the works can be read as a whole, especially through the all-glass front of the gallery.

I started the elegant five-artist show “Field of Vision” with Kamrooz Arams “Maghreb Drapery”, a pale green diptych full of wax pencil arabesques. Since these patterns have such different weights as American abstraction or Islamic design, but Aram relates so clearly to both, I couldn’t find my way around properly. How should I decide if the job was good? And what does it say about my standards that the qualities that made his pictures so pleasant to look at – rough brushstrokes, extra pencil lines, flat blocks of color that don’t quite reach their edges – too?, simply be evidence that they were unfinished in another context?

It turns out to be a great way to tweak the claims of American painting to build works by four other American painters who are flirting with the line between art and design. Patricia Treib plays a similar game to Aram and places ambiguous large circles that look almost like musical pauses – or asterisks, lilies or any number of other symbols – against cream-colored backgrounds. Sarah Crowner and Rebecca Ward sew pieces of painted canvas together – brightly colored for Crowner, muted for Ward – and let the seams form the hard edges of their patterns. Three pieces by Suzan Frecon, filled with muted red and burnished gold, confidently cast off the top-heavy shadow of 20th century abstraction and just shine.

The summer group exhibition at Miguel Abreu bills their 18 artists as poet-engineers, and I love the imprint. The stereotype that artists are poetic risks being viewed as sensitive dreamers; Redesigned as engineers, they appear as rigorous, highly skilled professionals who dig themselves deep into complicated problems – who think at least as much as they feel. Art becomes infrastructure, not perfumed frippery.

At Abreu, Scott Lyall presents one of his “Nanofoils” (2018), a modest little sheet of aluminum whose surface has been microscopically engraved in order to diffuse light in subtle colors that could never be achieved with artist pigments. (Butterfly wings get their much bolder effects from similar “technique” from Mother Nature.)

Nairy Baghramian’s “Big Valve” (2016) is a strange, head-high device made of a transparent plastic plate attached to a kind of galvanized hinge. It sits at the intersection of two rooms in Abreu and looks as if it could somehow catapult the viewer from one room to the other or prevent them from passing through.

The objects in Yuji Agematsu’s “Zip” project from 2018 appear less technical. Agematsu has been collecting tiny scraps of fascinating rubbish from the street for years; He presents the handful of finds of the day as a sculptural assemblage, exhibited in a “display case” made from the cellophane of a cigarette packet. Agematsu’s materials may be low-tech, but looking at the core of his method is reminiscent of a mining technician’s samples. It is exploration that all poet-engineers employ when digging deep for good art.

Many exhibitions of technologized art are about the technology itself and the wow-cool objects it leads to. The work at Abreu is more reserved, sometimes even opaque and inconspicuous. They model the complex process that leads to good art; they are not showing a salable product that is the bottom line.