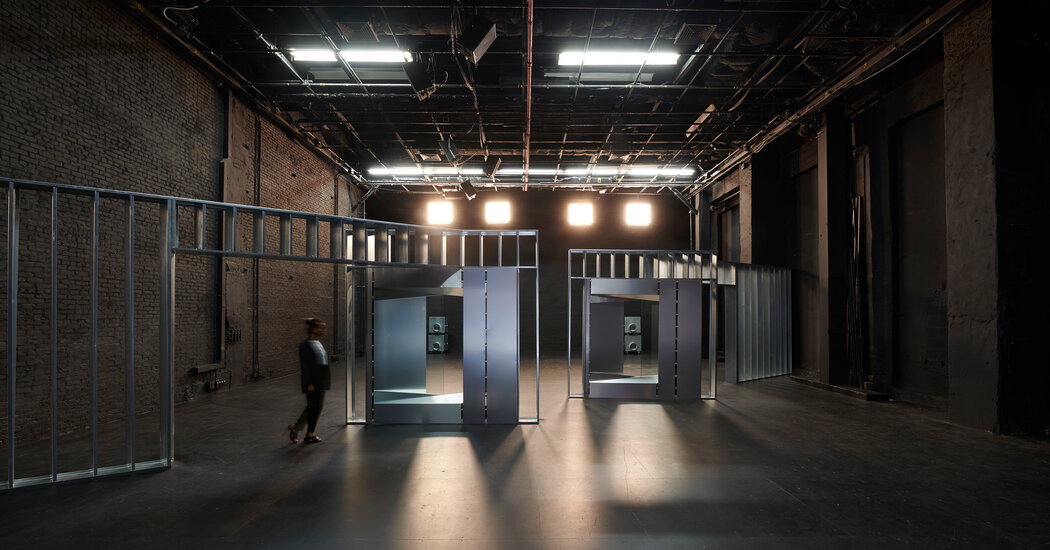 Even if you’ve been attending performances and exhibitions in the Kitchen for decades, it’s harder than ever to find this nondescript former industrial building on 19th Street: it was swallowed up in a maze of residential towers and luxury boutiques in Chelsea. Alan Ruiz’s blunt, simple but impressive exhibition, “Container and Contained” addresses some of these issues.

Ruiz is a New York based artist and writer whose work explores the politics of architecture and the built environment. His most prominent work here is an installation in the ground-level black box theater entitled “WS-C-62A; WS-C-62B ”(2021). Made primarily of steel and glass, it cuts up the space like a fragmentary wall or viewing platform. Every day, about eight minutes before the gallery closes, floodlights go on and Philip Glass’s “Dance IX” (1986) is blown through the room, a reminder of the institution’s earlier avant-garde days. Less obvious are the documents that make up “Transfer II (WS-B690-L40)” (2021) on display on the north wall of the gallery, detailing how Ruiz obtained the remaining air rights of the kitchen from the city for one year 1 . has leased per month.

Combining various recognizable directions in recent art – minimalism, conceptualism, pedagogy, institutional criticism – Ruiz addresses the way smaller institutions like The Kitchen have been gripped by the gigantic wave of real estate development and gentrification. It’s a depressing tale, but Ruiz’s clear-eyed approach mostly avoids nostalgia. Instead, he identifies and occupies the spaces that artists in a strongly changed New York still use – or can rent for a little hunger.

The first time I saw a New Red Order (NRO) video, I laughed – and then wondered if it was okay to laugh. Actor Jim Fletcher, who called himself a “Reformed Native American impersonator,” recruited viewers to inform the NGO, an art collective that is also a kind of secret society. The video was a perfect parody of a promo for something like a weight loss program, the only goals being decolonization and cultivating indigenous futures. It felt like a brilliant joke, the punch line of which would appeal to someone like me, a white man who lived on Lenape lands.

The NGO – whose main contribution are the artists Adam and Zack Khalil and Jackson Polys – now has a large exhibition in the Artists Space entitled “Feel at Home Here”. The insane upstairs installation includes two semi-satirical videos, graphics on the walls, branded beach products, and a fake real estate agency for the land repatriation. It also deals with two points of history: the seal of New York City, which depicts a lovable “Manhattan Indian,” and the Improved Order of Red Men, a nationalist secret society founded by and for white men in 1834, the structured it based on their fantasies of Native American society. Below, lightboxes and videos target seriously familiar, stereotypical depictions of Native Americans by sculptor James Earle Fraser.

While this is the NGO’s biggest show to date, the nature of the group remains elusive – and that’s the point. His gift is wise versatility. Using a mix of strategies and styles, the NGO sheds light on the ubiquitous violence against Native Americans, but then challenges us to do something with our guilt instead of letting the perpetrators off the hook.

Unrequited passions are the focus of the seven artists in “Wish”, a group exhibition about the productive pleasure of uncovering and anticipating our hidden desires. This fulfillment can be subversively erotic, as several works in the exhibition show, and most of all Torbjorn Rodland’s photo series, which colors ordinary cases of human interaction with eeriness, such as the outstretched hands touching a funeral flower arrangement (“Floor Flowers,” 2015) or a Open mouth in a doctor’s office (“Intraoral no. 2”, 2015). In Heji Shin’s suggestive photographs, these disturbing scenes extend into the animal kingdom, with the artist pairing ordinary creatures with human nudity, as in “Dick and Snake” (2018), or allowing barnyard creatures to act as innuendos, like in “Big Cock 7” (2020), a close-up of a rooster.

Though her punch lines may seem obvious or youthful, Shin’s photographs focus on the exhibition’s focus on the weak, often humorous and disarming connections between our desires and their analogies in the real world. Nora Turato’s mural “This little piggy goes to market” from 2021 proclaims the omnipresence of the gig economy (“has given up his employee job to write a newsletter”) with a perfect dry tenor using Corporate’s psychedelic patterns and sans serif Advertising. In a similarly sharp manner, Elliot Reed presents at the gallery a mountain of salt – 163.2 pounds worth 163.2 pounds the equivalent of the artist’s body weight – on which is placed the clothes the artist wore during a video call with loved ones . The 2020 work “End-to-End Encrypted (Lot’s Wife)” succeeds in signaling the physical absence that video technology tries to mitigate, but also evocatively alludes to the acute feelings of longing for loved ones and far away, like the entire exhibition.