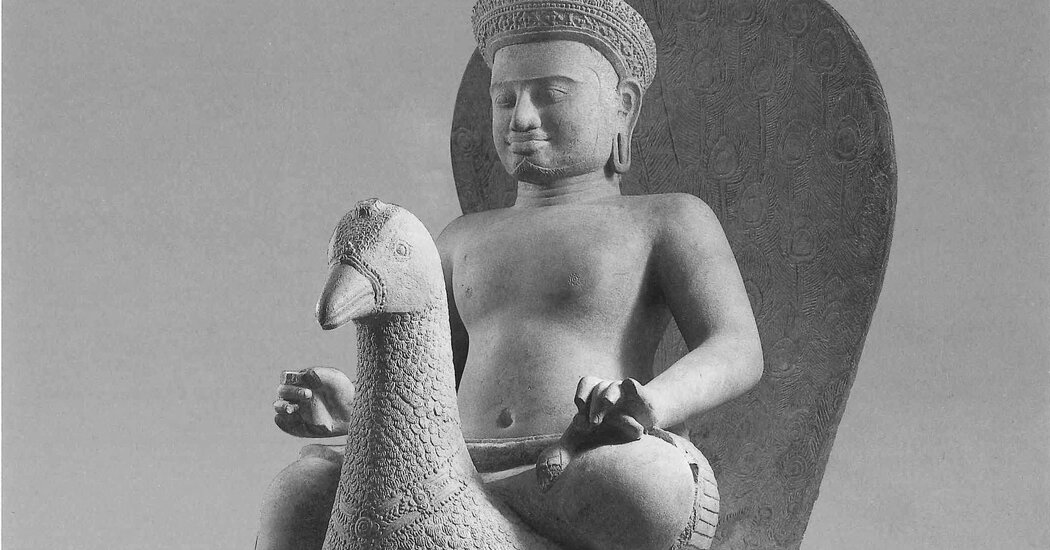 US prosecutors in Manhattan are planning to return a 10th century Khmer sandstone statue to Cambodia that is believed to have been looted from a temple there more than 20 years ago.

In a complaint filed Thursday with the Federal District Court in Manhattan, prosecutors described how the statue was stolen from a former member of the Khmer Rouge and then ended up in the hands of an art collector who walked and became through the war-torn jungles of Cambodia in the 1970s later accused of smuggling stolen relics.

The statue was removed in 1997 from a temple called Prasat Krachap on Koh Ker, which was the capital of the ancient Khmer Empire from 928 to 944, the complaint said.

An unnamed person who inherited the statue, which the Hindu deity Skanda rides a peacock, voluntarily waived any claim, the lawsuit says, which seeks a “forfeiture of all rights, title and interest” in the item.

Audrey Strauss, the US attorney in Manhattan, said in a statement that the sculpture “Skanda on a peacock” was of “great historical, religious and artistic importance for the people of Cambodia”. She added, “We reaffirm our commitment to ending the sale of illegally traded antiques in the United States.”

The theft, the complaint states, was carried out by a Cambodian national identified only as Looter-1 who joined the Khmer Rouge when he was about 10 years old. In the 1990s, Looter-1 led a group of approximately 450 people who stole artifacts from temples and archaeological sites, the lawsuit said.

One evening in 1997, Looter-1 and another person found the statue in the anteroom of Prasat Krachap, prosecutors said. They then transported it to a house near the border with Thailand, the complaint said.

Last year, according to the complaint, Looter-1 showed archaeologists where the statue was discovered. More recently, according to the complaint, a second person met with officials from the Cambodian Ministry of Culture and Fine Arts and admitted having been involved in the looting of Prasat Krachap and the sale of sculptures to people like Bangkok-based collector Douglas AJ Latchford be.

Latchford, also known as Pakpong Kriangsak, had claimed that Westerners who acquired Southeast Asian objects during the decades-long war in Cambodia and Vietnam should be viewed as rescuers from objects that may have been lost or destroyed in the jungle. He donated artifacts and money to the National Museum in Phnom Penh and was awarded the Cambodian Knighthood in 2008.

But in 2019, a Manhattan grand jury charged Latchford with, among other things, smuggling and conspiracy over a plan to sell looted Cambodian antiques. Latchford was in a coma and unable to refute the allegations, a legal adviser told him. That charge was dismissed after Latchford’s death last year.

(Latchford’s daughter has since said that she is handing over her father’s holdings of Khmer antiques, valued by some at more than $ 50 million, to Cambodia.)

In about April 2000, Latchford sold Skanda on a Peacock for $ 1.5 million to an unknown buyer and shipped it from Singapore to London. The statue was later brought to New York. After the federal authorities contacted him, the heir, who was not named, agreed to give up the property, the public prosecutor said.

The statue is now in the care of the Department of Homeland Security, awaiting return to “its rightful home,” said Strauss, the US attorney.