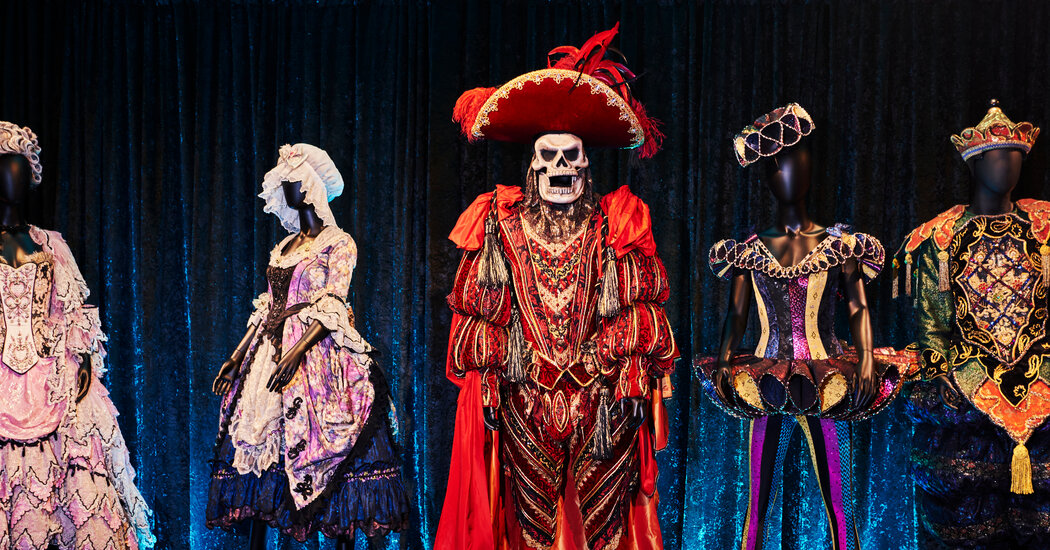 Here’s what you can’t see from the back mezzanine of a theater: the flocked velvet, the ruby-like rhinestones, the layered fabrics that form a lush rosette on each dance pump. This is the Red Death costume from the “Masquerade” number in “The Phantom of the Opera”. A carnival made of flocked velvet and golden braid combines art and craft, glamor and kitsch, fantasy and hand-sewn reality.

Red Death awaits you on the lower level of Showstoppers! Spectacular Costumes From Stage and Screen, ”a pop-up exhibition benefiting the recently formed Costume Industry Coalition, an alliance of over 50 New York City-based small businesses and independent artisans.

On Broadway, an orchestra pit separates you from glamor, even in the best seats. With “Showstoppers!”, Which runs until September 26th in a former model store in Times Square, you can stand close enough to see individual threads.

When it got dark in the cinemas last year because of the pandemic, the costume makers also had to close their stores. Designers are the visible faces of this industry – they are the ones who receive the Tony Awards, if not during the broadcast of the ceremony. But while they come up with the costumes, it is the manufacturers – the tailors and seamstresses and embroiderers and weavers and bead embroiderers and pleated makers and painters and hatters and glove makers and shoemakers – who actually build them.

“We create the three-dimensional, moving work of art,” said Brian Blythe, one of the organizers of the exhibition. Many of the pieces are couture items that are built on the bodies of individual performers and retreat when those actors leave a show.

“Showstopper!” shows around 100 costumes and a handful of the tools used to make them, such as hatter’s blocks and a 19th century crewel machine by embroiderer Penn & Fletcher.

The exhibition was put together in three and a half months and light, sound and design (by Thinc Design) were provided at cost or free of charge. So it inevitably feels ad hoc. The Broadway and Opera performances put their custom feet forward; the film, television, amusement park and dance parts are left behind. The selection reflects less a vision of engagement than what could be begged, borrowed, or quickly replicated.

But what’s more theatrical than a let’s put on a show ethos?

Not every piece of clothing benefits from careful study. Some need the alchemy of star power and stage lighting to shine. Yet everyone testifies to the men and women (mostly women) who patiently attached every ribbon and rhinestone. A handful of these craftsmen will be on site and go about their craft during opening hours. Here are 10 highlights from the show.

“The Cher Show” divided the life of its heroine into three actresses, who are referred to in the biomusical as babe, star and lady. The exhibition includes the costumes for all three in the number “If I Could Turn Back Time”, a seductive triptych made of velvet, rhinestones and boots. When Cher came to see the Broadway show, she reminded designer Bob Mackie that she hadn’t actually worn the glamorous bat wings that crown the display. “You would have done that if I had drawn them,” he told him

A few steps further are replicas of the outfits from “Six”, a pop musical about the six wives of Henry VIII, which was originally supposed to open on the day Broadway closed. The Tudor-inspired mini dresses are made from plastic, vinyl, and the occasional Swarovski crystals. They refer to the 16th century – the lattice patterns, the corsetry – but also to contemporary stars such as Beyoncé, Nicki Minaj and Ariana Grande. Thousands of metal rivets, some so sharp that they could cut you, adorn the outfits. Each has a personalized microphone holster.

One of the displays in the exhibition pays homage to Disney’s Broadway dominance. (“Frozen” announced its closure during the pandemic, but “Aladdin” and “The Lion King” will reopen soon.) Up close, the “Aladdin” costumes offer amazing subtleties, such as the beaded birds and flowering vines that Aladdin’s turquoise robes snake up and down. The delicate embroidery on Jasmine’s pink skirts may be hard to see without close-ups, but see how it contrasts with the uncompromising opulence of her top.

Perhaps the most memorable element of “The Lion King” is the life-size animal heads designed by director Julie Taymor and mask and puppet designer Michael Curry. (The Victoria and Albert Museum in London acquired two of these for its theater and performance collection.) But “Showstopper!” Shows the complexity of more subtle costumes. Take the prairie corset: strands of rope form a skirt at the bottom. At the top, fabric blades are hand-woven into more ropes to create a bodice that is both durable and delicate.

Diamonds are forever. Ostrich feather boas are not. In the Sparkling Diamond look from “Moulin Rouge! The musical ”, the courtesan Satine swings in a strapless dress, a top hat, high-heeled boots and a necklace that could strain the cervical vertebrae. There are rhinestones in a fireworks pattern on the heart-shaped bodice, and individual gemstones are sewn onto the stockings. Even the heels of the boots sparkle. As an allusion to Satine’s vulnerability, the skirt – made of ostrich feathers and mylar tinsel – softens the diamond hardness of her look.

During the “One Short Day” number from “Wicked” the school-age witches Glinda and Elphaba arrive in the Emerald City to see the wizard. The green costume for just one city woman consists of 900 yards of ombré-dyed organza ribbon. (It looks like an ordinary day dress covered in lettuce.) The skirt of the dress has a crease, and if you look beneath it, you’ll find five layers of petticoat, three of which are carefully embroidered, just in case the performer lifts hers Dance shoe.

When Paul Tazewell was designing the costumes for Hamilton, the musical’s creator and star Lin-Manuel Miranda told him that Hamilton’s suit should be green. Not just any green, but the color of money. (Pity for the costume assistant who had to go to the city’s fabric stores with a $ 10 bill.) The final outfit is ultimately more voluptuous than cash and has other surprises too: like the feminine lace on each cuff and the waterfall frill that runs down the neck surrounds.

Some of the gloves from Wing + Weft, the last glove maker in the clothing district, have built-in claws. Others are decorated with sequins, feathers, fringes, pearls, buttons, ruffles, and pearls. The studio designs for theater, film, and television and (along with its immediate predecessor, Lacrasia Gloves) also have a dozen first ladies gloved. But many of the most gorgeous creations seen here are for drag and burlesque – gloves designed to be worn and then flirtatiously pulled off finger by finger.

‘Phantom of the opera’

The Phantom’s red-death outfit is so top-heavy that it’s surprising that actors in “Masquerade” didn’t fall down the stairs. There is the feather-trimmed cavalier hat, the skull mask, the pearls, rubies, buttons, moldings and the tassels of the sofa that pull the stomacher together, an ornate table from the Renaissance. When you turn your back on these outfits, you’ll find designs from another archetypal scene – Christine’s white nightgown and the phantom’s black cloak from The Music of the Night.

Take a look at Medusa and you will turn to stone. That won’t happen with “Showstoppers!”, But when you see this mannequin in Medusa costume from “Dragus Maximus” by the Heartbeat Opera, a queer version of Homeric myths, you may be cold. The dress is wrapped in vipers, each 3-D printed at the behest of the designer Miodrag Guberinic. It has a less artisanal approach compared to the other looks seen but is no less complicated or exciting. And it points to the future of manufacturing.