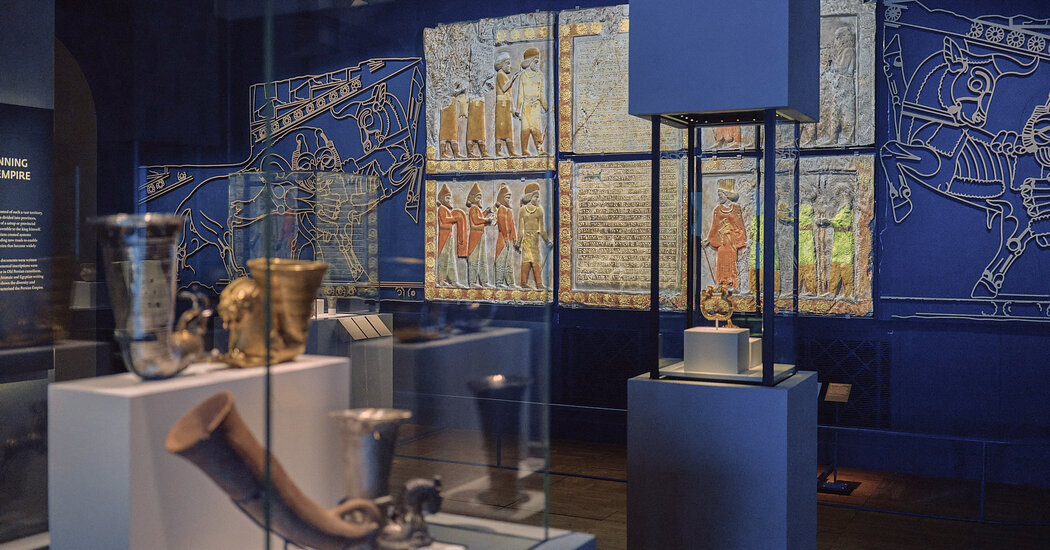 LONDON – The board game is roughly 4,500 years old. It is shaped like a bird of prey and has holes on the wings and chest where the parts were once positioned. It is one of a few dozen ancient objects that were supposed to travel here from the Iranian National Museum for a spectacular exhibition at the Victoria & Albert Museum. But they never came.

Other artifacts to be shown – as detailed and illustrated and in the catalog for this exhibition “Epic Iran” – were a gold mask, a long-handled silver pan, and a carved stone goblet. In order to secure the loans, the museum had long-term talks with the Iranian National Museum until the beginning of 2020, said Tristram Hunt, director of the Victoria & Albert Museum, also known as V&A.

“At a certain point it started to get quiet and I don’t think that was internal to them,” he said in an interview. “There were external political forces.”

Ironically, the overall purpose of “epic Iran”, according to Hunt, was to remove the political tensions that have hampered relations between Iran and the West since the fall of the monarchy and the establishment of an Islamic Republic.

“We want people to take a step back and understand that Iranian history did not begin in 1979,” he said. It was about looking beyond the paradigm of so-called Islamic fundamentalism and concerns about nuclear tests and Ayatollah visions and understanding the richness, breadth, depth, complexity and beauty of Iran. ”

The V&A exhibition, which runs until September 12, features an amazing array of works of art and treasures spanning 5,000 years: from the remains of the earliest civilizations to the creations of contemporary artists that are now in the Iran live. The entire spectrum of handicrafts practiced in Iran for millennia is illustrated with centuries-old carpets, illuminated manuscripts, miniature paintings, sculptural ornaments, court portraits and fine textiles.

In a broader sense, hostilities between Iran and the West intensified during Donald Trump’s presidency. He pulled the United States out of a 2015 deal to contain Iran’s nuclear capabilities, tightened economic sanctions against Iran, and ordered the assassination of Iran’s most powerful security and intelligence commander, Maj. Gen. Qassim Suleimani, in January 2020.

Cultural cooperation between Iran and the West has suffered, said Nima Mina, who taught Iranian studies at the University of London’s School of Oriental and African Studies for 20 years.

“Everything became politicized in Iran after the revolution,” he said. Cultural institutions and artists have to join “a certain ideological and political agenda”, as artists did in the Soviet Union, he said.

“The Islamic Republic is an ideological, autocratic regime, so it is difficult to be apolitical even if someone tries,” he said.

The V&A isn’t the only Western museum trying to get loans from Iran. In 2016, a long-planned Berlin exhibition of works from the Tehran Museum of Contemporary Art was canceled when Iranian officials refused export permits for the works. Half of it came from Western artists such as Picasso, Gauguin, Mark Rothko and Francis Bacon and came from a collection put together by the Iranian Empress Farah Pahlavi before the revolution.

Originally, under its former director Martin Roth, the V&A had planned to exhibit the private collection of the Sarikhanis, a British family from Iran who owns hundreds of Iranian art and heritage. When Mr Hunt took over the V&A in February 2017, he decided to transform the exhibition into a wider and more comprehensive one, containing treasures from the collections of the V&A and other international museums.

One of the most important objects in the exhibition was awarded to the V&A by the British Museum: the Cyrus Cylinder, a small clay tube from the 6th century BC. BC, the Cyrus the Great, the founder of the Persian Empire, had later buried under the walls of Babylon he conquered it. Etched into cuneiform – the writing of the ancient Babylonians – the Cyrus cylinder was “a charter of good governance,” in which Cyrus pledged not to “rule through oppression, dictatorship and tyranny,” said exhibition co-curator John Curtis , the British Former Keeper of the Museum’s Middle East Department.

The cylinder shows that Iran was a country of religious tolerance and enlightened the rulers two and a half thousand years ago. The British Museum included it in the popular “Forgotten Empire” exhibition in 2005, which also aimed to open the western mind to the country’s ancient culture and history.

This show received a very important loan from the Iranian National Museum: a silver plaque documenting the founding of Persepolis, the capital of the Persian Empire. The tablet traveled to London “in the face of considerable press comments and complaints that the British could not be trusted to return it,” said Neil MacGregor, then director of the British Museum. In return, Iran asked to borrow the Cyrus cylinder that had traveled to Iran in 2010, fearing in London that it would never return. (These fears were unfounded: the priceless object was returned.)

In addition to artifacts from Iran’s past, two rooms from “Epic Iran” on modern and contemporary art show that Iranians actively participated in the art movements of the 20th century and are now producing ultra-modern photography, painting and installations.

The high proportion of exhibited female artists – including photographers Shadi Ghadirian and Shirin Aliabadi – shows that Iranian women have exceeded gender inequality and restrictions such as the mandatory veil for the production and exhibition of their works.

This final section of the exhibition – compiled by associate curator Ina Sarikhani Sandmann, whose family lent the exhibition extensively – also coincides with the most recent period in Iranian history, a period of revolution and still raw divisions. Wall texts seem to reflect these tensions.

They refer to “the authoritarian rule of the monarchy, its ties to economically exploitative Western powers, and its self-glorifying attempts to channel Iran’s pre-Islamic past,” which led to disagreement and revolution. Post-revolutionary Iran, on the other hand, is described as “isolated” and tries to open up to the rest of the world “despite tough domestic politics and international economic sanctions”.

“The choice of words with regard to the Islamic Republic is very careful,” said the academic Mina. He said it was likely out of a desire not to “endanger” Iranian artists participating in the show. Typically, painters, photographers, filmmakers, and sculptors in general had to be “loyal, conformist, or at least not challenging” to continue their art practice, he said.

Despite the setbacks in credit, Hunt, the V&A director, hoped the show would pave the way for a collaboration: the exhibition was always meant to be a two-way exchange, he said.

“It would always be nice to have a relationship with Tehran that we would like to build on in the future,” he added.