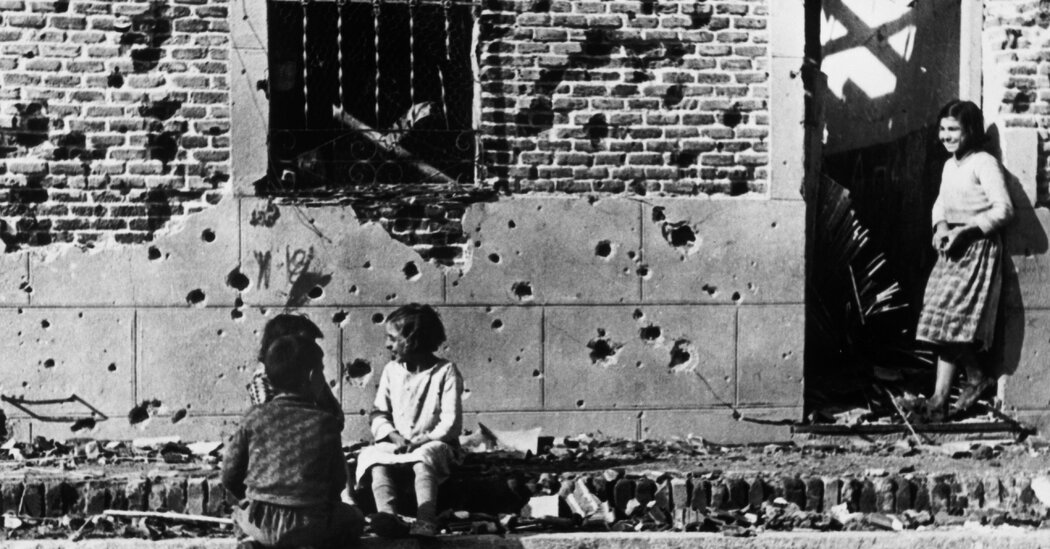 MADRID – In 1936, photographer Robert Capa turned his lens on children outside an apartment building in Madrid that was bombed by the German Air Force. This image of the Spanish Civil War remains a powerful reminder of the impact of armed conflict on civilians.

This month, some 85 years after the photo was taken, plans are being made to preserve the rundown, centuries-old building and convert it into a cultural center that will celebrate the photographer’s work and evoke Madrid’s war history. The residents of the apartment building were permanently moved to subsidized apartments.

For those who settled in the building, the change was long overdue. Most of them couldn’t get better because of the chronic lack of subsidized housing in Madrid. In January, the discrepancy between owners and non-owners of the city became apparent when a huge blizzard deepened the misery in one of the poorest areas of Madrid.

In their new homes, residents pay the same or less for more space, adequate heating, and other improvements.

“Capa has been wonderful for us,” said Cristina Uquillas, who moved out last week with her two children and mother – the last of the 14 families living in the building to do so. “But I also believe that people should be able to find decent accommodation without that miraculous help from a great photographer.”

When the last residents moved out, the builders immediately sealed the doors and windows of the apartment building to prevent squatters from moving in.

Ms. Uquillas, a meat packer at Madrid’s main grocery store, said she was happy to leave the damp, peeling walls behind, but admitted she would miss the tight community of the apartment building.

“Everyone always had a problem,” she said. “But there was always someone who could help.”

Since the 1980s, Spain’s economic growth has been heavily dependent on the construction sector. However, the country has reduced the amount of government-subsidized housing to less than 1 percent of the total supply – around a quarter of the EU average.

Amid a deep recession sparked by the pandemic, the social housing shortage has become a political hot potato, even straining the relationship between the two left parties that make up the coalition government.

José María Uría, who works for a union foundation that led efforts to salvage the Capa building, said the tenement, which opened in 1927, was billed as a “new living model for the working class”.

Some residents even called the building “the home of the rich,” added Uría, because one of its courtyards had the relative luxury of a water fountain.

Since then, the Capa apartment building in the Vallecas district of Madrid has had an enchanting life.

Not only did it survive the Spanish Civil War, it also survived the area’s major overhaul in the decades following the fighting, leaving it as one of the few buildings that had barely changed since that time.

The photo of Capa, who was born in Hungary and traveled to Spain to document the war, was published on the cover of French news magazine Regards in December 1936. It was later used by other European and American publications, including The New York Times.

The image “established its reputation,” said Cynthia Young, former curator of the Robert Capa Archives at the International Center of Photography in New York. “It was the first time he’d been called on the cover of a magazine for his work, which was rare for any photojournalist at the time.”

The decision to keep the building was made in 2018 when the parliament of the Spanish capital region voted to create the cultural center. To take possession of the building, the city paid off the old owners at a cost of around $ 1 million.

Dealing with the history of the civil war has long been controversial in Spain. And like other projects related to Spain’s war past, this one got into politics, especially when right-wing politicians regained control of the city government of Madrid in the next year. They delayed confirming what would be shown in the middle.

Mar Espinar, a city lawmaker for the opposition socialists, said she wanted the center to document the war’s air strikes.

“Politicians may disagree on many things, but people need to know our history and know that bombs were once dropped on civilians’ homes – as a significant fact, not a matter of opinion,” she said.

In 2019, the socialist-led government exhumed General Francisco Franco, whose victory ushered in a dictatorship that only ended with his death in 1975. His remains were buried in a family crypt.

On the other hand, Madrid city officials last year removed a plaque from the home of Francisco Largo Caballero, a socialist who became Prime Minister of the Republican government in 1936, a few months after Franco and other generals launched a military coup.

The 1936 bombing of the Vallecas neighborhood was not an obvious military priority for Franco and his forces, but it did provide a testing ground for his German allies.

Walther L. Bernecker, professor emeritus at the University of Erlangen-Nürnberg in Germany who studied the war, said the attack on Vallecas, as well as later bombings like the one that devastated the city of Guernica, were “a perfect laboratory” for the air force, to test their weapons and “spread terror among the civilian population” for Nazi Germany.

Capa did not write any specific captions for his Vallecas photographs, so they have also appeared in some publications without attribution or even in a manipulated context. In Italy, a pro-fascist magazine headlined his picture with the words “The Cruel War” but did not mention which side had carried out the bombing.

Nowadays, any sharpness of life in the historic building has been outweighed by its practical drawbacks, residents said.

“The only reason I’ve lived here for so long is that I’ve never been able to afford anything better,” said Rosa Báez, who lived in the building for eight years.

“I’m getting a better apartment now and I’m one of the lucky ones,” she added.

When Ms. Uquillas left with her family, she thanked Capa for his indirect role in their move. Finally getting an upgrade, she said, felt like “winning the lottery”.