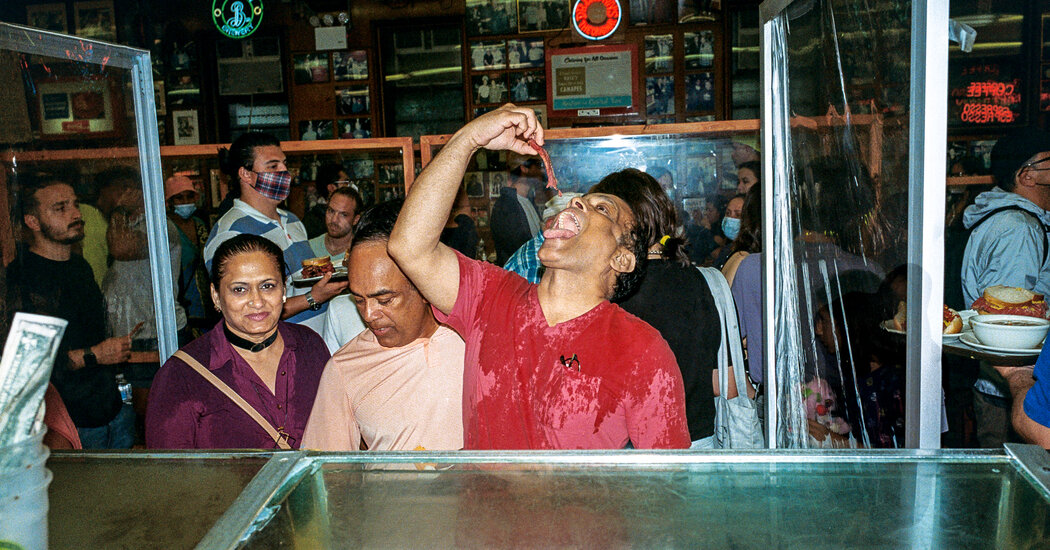 The reopening of New York created a banquet of sights, smells, flavors, textures, and sounds. The New York Times asked photographers to share how the city nourishes all the senses.

OK McCausland wanted to capture flavor. “There is this moment that everyone feels when they indulge in something they love. I was looking for that moment, ”she said – like a group dipping into a trough of popcorn at a Mets game, or a piece of meat being devoured at Katz’s delicatessen in Manhattan.

Tess Ayano crossed New York for a week in search of touch. “I’ve been looking for moments and vignettes that can only be found when you’re in town,” said Ayano, like the little boy who stopped in Chinatown to greet them or strangers in Washington Square Park break the ice over their dogs. “Even if there was no physical contact, there was still the possibility of connection.”

Dane Manary set out to visualize visions and found out much both in a barber shop in the Upper East Side of Manhattan and from the Empire State Building Observatory’s point of view. He also found something else: a feeling of longing – the way of observing from a distance. “You want to go out and see what there is to see, but there is also a void and a bit of darkness,” he said.

Gabriela Bhaskar, a Times Photo Grantee, was walking through New York City, in tune with scents – and the memories they so often conjure up, like the familiar smell of the day before the Williamsburg, Brooklyn garbage disposal, or the flavors that come from the roasted nut cart in Harlem. “I cannot move around the city without activating my mind with smells. What do I notice? “Said Bhaskar.

New York is full of noise. McCausland kept his ears to the rattle for “sounds that attract you,” she said, be it the shouted arguments of a demolition cleanup team, a loud basketball game, or an impromptu mother-daughter karaoke duet. “The environment is already so stimulating,” said McCausland. “You are everywhere, all the time, all at once.”