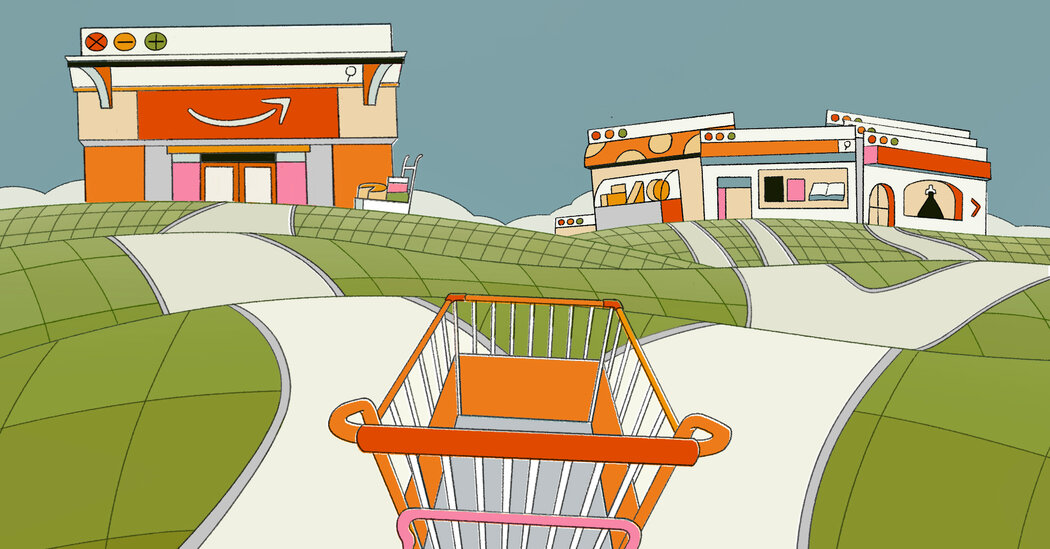 Today I want to talk about one of the most fascinating problems in technology: trying to turn the corner store into an online store.

Almost every business, from Walmart to baked goods, wants to find customers and sell their products online. This only accelerated during the pandemic. But it is difficult. A cheese store owner doesn’t have the time, expertise, or money to be as good at online shopping as Amazon.

What happens raises a big question about the future of retail: will one-stop specialists like Amazon dominate everything or will the internet give anyone the opportunity to open a successful business?

To simplify things, there are essentially two ways for companies that sell products online or just want to have an Internet presence. You can either do it yourself or connect to an online powerhouse. Both have disadvantages.

That cheese store or local toy store may have their own website but hope they get noticed. It can also be annoying to manage a website and possibly process online orders as well.

Or the cheese store can sell online at a grocery bazaar like Goldbelly, and the toy store can sell goods through Amazon – which already has a lot of potential customers – and those sites can catalog inventory and handle payments and shipping. The downside is that merchants tend to give up a large chunk of sales, control and loyalty to these websites.

Enter a million tech companies that promise to help. Facebook and its Instagram and WhatsApp apps offer businesses or private companies the opportunity to easily go digital and reach a large audience without losing their independence. Google, Square, Reliance Jio in India, and WeChat in China have a similar premise.

To varying degrees, all of these companies are trying to combine the do-it-yourself approach to online businesses with the benefits of connecting to giant internet malls like Amazon.

Perhaps the most interesting of them all is Shopify. Without most people noticing, its software powers the online businesses of around 1.7 million companies and has grown by leaps and bounds during the pandemic.

For a monthly fee and a relatively small commission on sales, Shopify allows businesses to set up a website and app, view images of their products, connect to their inventory systems, and process online payments.

Unlike many other tech companies looking to get business online, Shopify promises to give businesses the ability to reach customers anywhere, including Facebook, Walmart.com, and their own websites. Companies can also ship products from a Shopify warehouse network, as offered by Amazon sellers.

You can see the promise. Just like Uber wants to put Amazon’s delivery power in the hands of local businesses, Shopify wants to bring Amazon’s digital capabilities to stores without losing their individuality or spending a fortune by selling on Amazon or any other online bazaar.

Will that work? We will see. It was announced this week that Amazon has bought a Shopify-like company. This could be a sign that Amazon believes Shopify is focused on something.

I wonder if there really is a middle ground that Shopify would like to offer – and not just when shopping. Services like Patreon and Substack promise musicians and writers an easy way to reach the world without becoming a faceless cog in internet machines like YouTube.

However, the history of the internet is that companies that bring large numbers of people together and make it easy for all of us are the most successful. And that’s Amazon.

Something strange is happening in Australia. There a new law is proposed that will require big internet properties – basically Google and Facebook – to pay news organizations directly to link to their news.

In response, as my colleagues reported, Google signed a deal to pay Rupert Murdoch’s News Corp, one of Australia’s dominant news organizations. Facebook said it wouldn’t call and blocked all links to news articles on Wednesday. (And a lot of non-news, including government information.)

Here are some thoughts:

The opposite of an outsider: Google and Facebook are the ultimate big dogs, and everyone else – even Murdoch and the rest of the concentrated Australian media industry that campaigned for this law – are an outsider by comparison, wrote my colleague Damien Cave from Sydney.

Like their counterparts in many other countries, Australian media companies have complained for years that they have not been adequately compensated for the value their information offers to internet giants. But Australia (so far) is one of the few countries where the news media had the power and connections to make this happen.

Facebook and Google are not in the lock step: Google sees news as essential to people searching for information on their websites. Facebook sees itself as a hub for people to come together – and news articles are a relatively small part of the global conversation.

But it’s not just philosophy at work. Google may be betting that it will be cheaper and smarter to pay in Australia – and maybe elsewhere – and avoid sparring with news agencies and the government. Facebook seems ready to fight. (It’s also possible that Facebook will compromise and messages will return.)

An experiment in news without Facebook: Australia is an ignorant testing laboratory of what happens to Facebook, news organizations and the public when Facebook is a news wasteland.

After Google News closed due to litigation in Spain a few years ago, online readership for news organizations fell behind, although it may not have been a bad thing.

But these are meaty questions with no easy answers: are Facebook and Google good for news organizations, or are they parasites? Are you required to support high quality news? And are people better informed about reading the news on Facebook, or is it such a mix of good and junk that nobody loses when the news is gone?

The common thread in many disputes with America’s tech superstars is a desire to fix what people believe is the damage caused by the reach and power of corporations. This battle in Australia and the worldwide spas for regulation are the same version of trying to put the genie back in the bottle.

Penguins at a Syracuse, NY zoo were given stones for Valentine’s Day. Please don’t get stones as gifts for loved ones, but these penguins loved the new additions to their nests.