Home Home With Kuba Kings and Kehinde, a Painter Rises Above the Fray 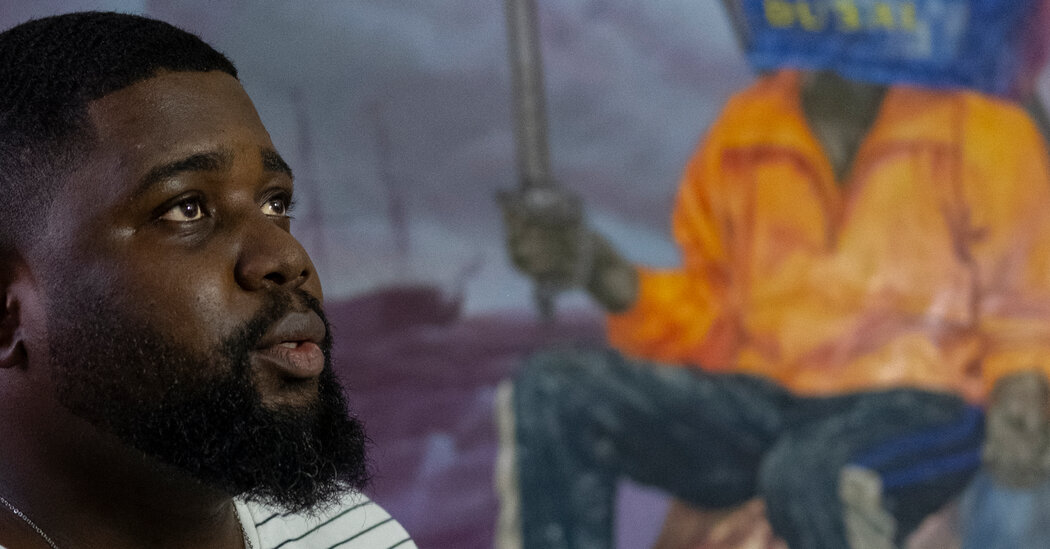 KINSHASA, Democratic Republic of the Congo – When the painter Hilary Balu was studying at the Academy of Fine Arts in Kinshasa, one of the most populous cities on the African continent, he met all the masters: Michelangelo, Leonardo da Vinci and so on. until his curriculum turned to royal portraiture.

He marveled at the pictures of men and women from the 16th century, who were posed in colorful, ornate robes. But he wondered where were the Africans? He decided to find out.

At about the same time as the velvet-clad European kings and queens were being celebrated in paintings, he learned that the Cuba Kingdom was emerging in Central Africa. Cuba kings wore leopard skins and eagle feathers. And with their elaborately designed costumes and the embroidered textiles, ornate pearl hats and wooden mugs with which they were celebrated, they ushered in an important era of artistic innovation.

“The history of African art was not part of our curriculum,” said Balu. “We say Africa is the cradle of mankind, but paradoxically, Africa is not represented in art history.”

He toyed with this idea and created paintings in 2015 that were copies of the royal portraits – but he carefully cut out the white faces. In their place he painted masks of Cuba kings. He called the series “Cuba in the Skin of Someone Else”.

“The idea was to find another way to create our own history using the history of Europe,” said Balu, 29, and is believed to be an inspiration to Kehinde Wiley, who has questioned the lack of black people in Western art .

Balu lives here in Kinshasa, the home of world-famous musicians like Papa Wemba, nicknamed the King of Rumba Rock. The city has also spawned artist Alfred Liyolo, known for his curvy bronze sculptures, one of which is on display in the Vatican.

But for other not-yet-famous artists who live in the sprawling city of an estimated 17 million people, struggling to make a living can be a challenge. For them it seems almost impossible to secure the state funding of the Democratic Republic of the Congo for the arts. Daily life in the capital can be tricky, where at dusk just a few lights twinkle over the lush hills beyond the city center – much of the city is without power – and the main form of public transport is a line of battered, rusty yellow delivery trucks nicknamed the Spirit of Death because of their propensity for fatal accidents.

But art is everywhere: colorful paintings are sold in chic hotel lobby exhibitions and placed in the dirt in the streets of the city center. Artwork by local painters adorn the walls of the simple, blocky government buildings. In an old textile factory in the warehouse district, Kin ArtStudio is organizing artist residencies as part of the upcoming Congo Biennale 2021 (September 17 to October 24). With the theme “The Breath of the Ancestors” it examines how, despite “the violent dismemberment of the cultural and spiritual context, centuries of abuse, deception and manipulation, the power of ancestors cannot be extinguished”, said the visual artist Vitshois Mwilambwe Bondo, who Founder of both projects. “How much of the creative genius of the bubbly art scene comes from the ancestral breath?” He said.

Balu works professionally with Bondo and his work was included in the 2019 Biennale. He spent three years as a resident at Kin ArtStudio. Outside of Kinshasa, Balu’s works have been shown in museum exhibitions in Zurich; Graz, Austria; and Sète, France. Earlier this year he was selected as Resident Artist of Black Rock Senegal, the Dakar program initiated by Wiley and best known for his portrait of Barack Obama in the White House.

One recent evening in a hilly neighborhood in Kinshasa, Baloo was walking down a dirt road with chickens scraping in gullies and groups of men sitting in plastic chairs on a street corner chatting the last few hours of sunshine. He walked into his house to show off his studio, just a guest room with white tiled floors and fluorescent lights. Large murals in purple, blue, and orange leaned against the walls. Splashes of paint were dropped on a pallet on the floor.

Baloo hovered over European art books while holding a long, antique sword and brandishing it as he was encouraged to talk about his latest work.

The painting he was just finishing shows a man – a migrant who wants to cross the sea – in sweatpants and a nylon zippered pocket over his head, sitting on a patterned cloth. He is holding the same sword that Baloo wielded. Commercial yachts from Portugal swing on a purple sea.

The sword came from village chiefs whom Balu met near the Angolan border, where merchant ships arrived centuries ago in search of slaves. Officials there told Baloo that Portuguese traders had tricked local chiefs into trading people for items such as the sword, as well as military helmets and medals, and said they had special powers.

The piece is part of a new series called “In the Floods of Illusions” that aims to combine contemporary migration and forced migration invented by slavery.

Baloo’s painting reckons with the strong influence of the West on modern life in the Congo. In his view, both migrants looking for work and a new life in Europe and merchants looking for slaves and natural resources used the same sea to fulfill their conviction that they would find “the best on the other side” would.

“For me, this water expresses this space of illusion,” he said.

The work stems from his desire to understand his place in an outside-dominated society where the overwhelming majority of people live in extreme poverty and where international companies are engaged in cutting down trees in lush forests and digging for diamonds, gold , Copper and other minerals.

“I would like to know,” he explained the research for his work. “How the capitalist system came to the Congo, how the system has changed our political identity, economic identity and cultural and spiritual identity today.”

Balu’s new work recycles a picture from his series “Voyage Vers Mars” from 2020 and examines the tragedy of contemporary migration to Mars.

In both series, the figures in the paintings carry nylon bags that migrants often use to carry belongings that he has made into an astronaut helmet. The bags are made in China, but have images printed on them that represent the West – for example a modern city skyline. The images, he said, are what outsiders think Africans want. Another illusion, he said.

Baloo wants to stay in Kinshasa. His pictures, he said, would never be the same if he lived anywhere else.

“When you leave the house and go out, you see people screaming, you smell the chicken mayo, that smell – that’s Kinshasa,” he said. “My work embodies the soul of the community.”