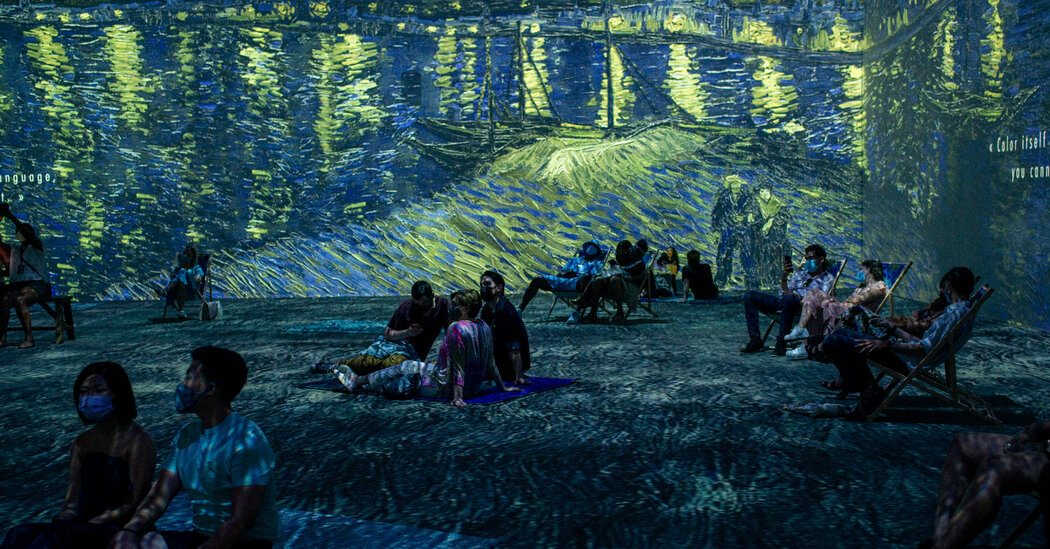 In 2017 I made a trip to Paris, where I greedily absorbed as much art as possible. In one of the cave-like chambers of the ornate Musée d’Orsay, the Van Gogh exhibition, his framed works (“Starry Night over the Rhône”, “Bedroom in Arles”, “The Church of Auvers”, some of his portraits) were in front of a shameless one Sapphire background instead of the usual plain white museum walls.

I’ve been given a Starry Night poster as a gift from a college friend since I was in dormitory. It hangs framed in my bedroom today. In the Musée d’Orsay I stared at his restless sky and fields, stood for a long time in front of his self-portraits, rooted in the depths of his gaze. And I cried – suddenly, violently. I rushed out. I had never reacted so violently to a painting and have never done it again since.

What does it mean to develop intimacy with an artist – even one who is separated by over a century of history? And can an artist’s work be reinterpreted to give modern audiences an even more intimate contemporary relationship with art?

Immersive art installations – and especially immersive theater – trigger my sense of game and activate both the critic and the artist in me. However, there is a huge difference between art that is designed to be immersive and art that is heavily geared towards an immersive medium.

But first there was a beautiful translation by van Gogh: The entrance ceiling of Pier 36, an imaginative 3D replica of “Starry Night” by designer David Korins, with thousands of painted brushes, felt like a beautiful homage – an artist who to another artist in a work that invites a new perspective and channels the style and motifs of the original work without aiming for an exact reproduction.

And yet that was just a starter for the main show, a series of interconnected rooms where people lay and sit and stand and watch a video of Van Gogh’s work projected into every corner of the room, and that stunned me . And what excited me wasn’t the young women posing for selfies, or the older tourists lounging on the beach, or the restless children washing around and climbing on Korin’s large abstract monuments, whose reflective surfaces captured all the sunflowers and stars – I have seen a lot of this in traditional museum exhibitions on Van Gogh’s works.

It was the brevity of the images in the video sequence – how quickly they appeared and disappeared. And it was the animations – its mighty cypress trees manifesting like apparitions from the mist, literally rendering the magic of the work. There is no room here for subtlety or implication. The beauty of being swallowed up by projections of van Gogh’s colorful fields has been dampened by the sloppiness of the translation. I stood a little apart to examine the projections and lost the resolute brushstrokes and tiny color gradients in the blurring of the digitization.

It quickly became clear to me that for many in the audience these details were irrelevant. The aim was to use the art as a backdrop for a kind of theater experience.

It was precisely this experience that worried me. How do you turn art, which is so explicit and individual for Van Gogh’s perspective, into theater? Despite all the colors and characters in his works, it would be imprecise to redesign his paintings as backdrops on the quasi-stages that these exhibitions create so that audiences can explore not as admirers but as active participants.

No matter how many times I toured the chambers, I got an itchy feeling that it would be dishonest to enlarge a 2 ½ by 3 foot painting to fill the horizon of a 75,000 foot room. The images are expanded and duplicated to create a repeating panorama. But there is a reason for the size of the original work; what the painter wanted to cover up, what parts of the world we are allowed to see and what is still to be imagined. A painting hanging on a museum wall is a statement that the artist says, “Here is a piece of a world of color, style and shape that I gave you.”

Trying to add new depth and interactivity to the artist’s work means that van Gogh’s originals – his brushstrokes, his swaying fields and streams of blues, or the bowing heads of his oleanders – didn’t breathe.

The van Gogh exhibition in Vesey similarly used projections along with 3D deconstructions of his paintings, and I felt myself with these impressive life-size replicas of works like “Bedroom in Arles” in an exhibition that stylized itself as a “virtual museum” , more comfortable. ”But my eyes glossed over the canvas reproductions of the work, which were so inferior to reality: the colors were matte, the textures were nonexistent, and the fibers of the canvas shone artificially in the light of the exhibit.

Not the Van Gogh works that I remember, but here at least the art was, quiet and on its own and without interruption. And here was the artist – a timeline of his life, blurbs about his career.

However, I found the last part of the exhibition – a trip with a virtual reality headset through some of the landscapes on which his paintings are based – repulsive. In this digital world, I floated through Van Gogh’s house, then out onto the street with people walking around, working and chatting. Every now and then a frame would appear in front of my field of vision and the scene would morph in accordance with its painted counterpart. We are supposed to see the difference between the real world and Van Gogh’s world from the perspective of a mind-reading illustrator. But can any set designer slip into the role of an artist? Is it better to leave some chambers untouched in the impenetrable mind of an artist?

Of course, there is no way to revive the artist, neither by recreating his world by Vesey van Gogh, nor through the Pier 36 exhibition (which also features an AI van Gogh that writes you a letter; an algorithm recycles words and sentences from his Reality – Letters of Life and delivers them in his own handwriting).

In search of the real Van Gogh, I made my first museum excursion after the pandemic to the Met. I spent several minutes fascinated by the wild, almost sensual coils and curls of the dark leaves in “cypresses”, in contrast to the powdery shades of blue and whimsical shades of pink circling the sky. A group of eager art students in cut-off jeans and Doc Martens raved about what they’d learned from “Wheat Field With Cypress Trees” as I gazed at the painting’s sea-green bush, which leaned to the left as if overhearing a conversation outside the picture.

When I was doing “Self-Portrait with Straw Hat” I heard someone say behind me, “What a sad little man.” And of course they were right. The painting’s fleshy pinks and reds give it a more physical emphasis than its signature cool blue observation of nature. The same sunny yellows and ferns greens that look humble in his coat and hat make his face look sickly and yellowish.

What a sad little man – yes, Van Gogh’s personal story is a big part of what we are referring to, and especially when we are through a year and a half of the pandemic: his life in need, including isolation and depression. And in his case there was also poverty and eventually suicide. The van Gogh I met in Paris made me cry, not only because of the beauty of his work, but also because of his insecurity and self-doubt, his struggle with mental illness. The myth of the tormented artist is so seductive, I’ve clung to it for my life.

But what the two immersive exhibitions of van Gogh made clear to me is that in 2017 I also made unfounded assumptions about the artist and his work. I can never pretend I understand his way of thinking and worldview. I only know what I’ve read, and that’s not enough to grasp all of life. What I know is the way his works evoke something beautiful and unfathomable in me – the critic, the art lover, the poet. Because at the end of the day we can’t pretend we know Van Gogh any more than we can’t pretend his work can be projected onto walls as if it were the same experience. All we have is the pictures in the frames, but these nights, those cypress trees, those sunflowers – they’re more than enough.

New Covid variant first present in UK may turn out to be dominant pressure...

On-line Scammers Have a New Provide for You: Vaccine Playing cards

These nations are open to vaccinated vacationers — however not their children

A Biologist, an Outlandish Stork and the Military of Girls Making an attempt to...