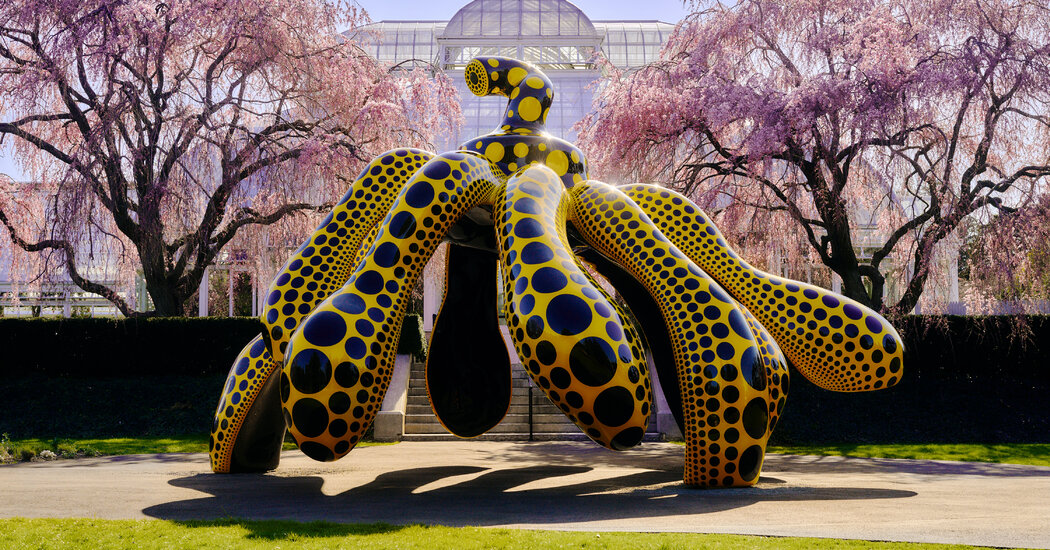 One thing the pandemic has kept from us – at least for a while longer – is the exhilarating experience of being lost in a crowd. For some people it is exciting, for others it is annoying. It’s always a change of perspective.

Three years later, the exhibition includes several ambitious pieces as well as some ingenious revivals of Kusama standards and a solid little retrospective of early paintings and performances. (There is also a small free-standing infinity room – a mirrored little shed in the Home Gardening Center – but the garden will not open its interior until summer.) Not every new work is equally strong: “Dancing Pumpkin”. An insanely speckled 16-foot yellow octopus and “I Want to Fly Into Universe,” an aluminum sun with twisting red tentacles, are perfect. “Flower Obsession”, an installation in which visitors are asked to put stickers on a greenhouse that are too tricky.

But the overall idea of ​​putting Kusama’s repetitive dots against the teeming profusion of a botanical garden is inspired. Kusama grew up in Matsumoto, Japan, where her grandparents ran a commercial kindergarten, and plants have played a huge role in her mental life. She drew them – look for some very detailed pencil drawings she made as a teenager – and hallucinated them when dancing pansies and pumpkins visited her as a child. (She also saw optical patterns and continued to struggle with her sanity, even when she moved to New York, held protests and “happenings” there, and returned to Japan.)

Pairings of brightly painted, oversized steel flowers with living palm trees in the Conservatory of Enid A. Haupt or even of patterned polyester packaging with stately oaks offer a surprisingly subtle interplay of shapes and colors. Even more striking is the way in which nature and artistry complement each other psychologically. Kusama’s hard, comparatively cold spots bring out the dark side of the plants, their relentless, impersonal compression of growth, gender and decay. At the same time, the actual flowers underline the longing longing for Kusama’s entire project, the slightly desperate ecstasy that this famous and productive artist has created for herself for so many decades.

Once you know what to look for, you can find it indoors too, especially in an installation called Pumpkins Screaming About Love Beyond Infinity. Yellowish acrylic pumpkins dotted with LED lights fill a five-foot glass cube in a darkened room near the main garden entrance. At first, a small pumpkin lights up, as if a child’s mind is blinking into consciousness. It’s cozy and charming to see the little glow surrounded by larger shapes. But as more pumpkins turn on, the box’s panels become two-way mirrors that endlessly recreate the little scene until you stare into an inescapable infinity.

“Narcissus Garden”, the show’s quiet showstopper, is a revival of a piece that Kusama wrote at the 1966 Venice Biennale – or rather close by. Without an invitation to participate, Kusama stood at the door optimizing Gawkers and collectors with 1,500 reflective steel balls the size of bowling balls and a sign that read “Your Narcissism for Sale”. (It got its chance to officially show in 1993 when it was awarded the Japanese Pavilion.) Here in the Bronx, the play elevates human claims more generally. The steel balls float on the water of an artificial wetland in the Native Plant Garden, move back and forth in schools, grab each other tightly at the edges with gentle clicking noises and occasionally set off on their own. I saw one of them pass a quacking duck, slowly like an alien ship.

The duck seemed unimpressed. I may have projected, but maybe that’s the point – it’s hard not to see yourself in a mirror, especially one that appears to be moving with such a purpose. In the end, of course, the ball that caught my eye was no different from any other, and they all just moved mechanically along the tide. But I can’t think of a better way to spend a spring afternoon than watching them.

Julia Carmel contributed to the coverage.

Covid danger low for many Individuals to assemble over Fourth of July weekend, Gottlieb...