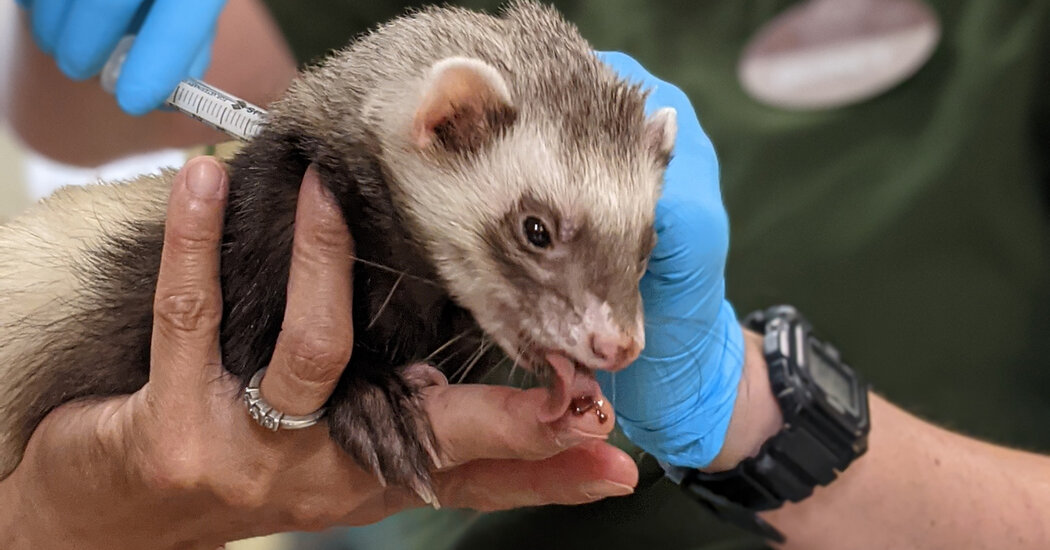 The Oakland Zoo in California started this week with bears, mountain lions, tigers and ferrets, the first of about 100 animals to receive an experimental vaccine against the coronavirus this summer.

Zoetis, a veterinary drug company, is donating 11,000 doses of the vaccine to approximately 70 zoos, sanctuaries, universities, and other wildlife sanctuaries in 27 states, and Oakland Zoo is one of the first to benefit. The vaccine is only intended for animals, is going through a different approval process than for humans and cannot be used to protect humans.

“It means a lot more safety for our beautiful animals,” said Dr. Alex Herman, vice president of veterinary services at Oakland Zoo. “Our very first animals to be vaccinated in the zoo were two of our beautiful and older tigers.”

There were no cases of animals infected with SARS-CoV-2, the virus that causes Covid in humans, at the Oakland Zoo. But the zoo has taken extraordinary precautions, said Dr. Herman, by asking the zookeepers to keep a safe distance from the animals and to wear protective equipment.

However, big cats and other endangered animals such as gorillas have been infected in zoos in the United States and elsewhere. The San Diego Zoo vaccinated monkeys in February with the Zoetis vaccine, which was first tested on minks.

The New Jersey-based company made the same experimental vaccine available to Oregon mink farmers after the state ruled this spring that all mink it farms must be vaccinated. The US Department of Agriculture approved the vaccine for experimental use “on a case-by-case basis,” said Christina Lood, senior communications director at Zoetis.

The vaccine donation is the latest development in the patchwork response to animals infected with the virus.

Since the beginning of the pandemic, pet owners, zookeepers, fur keepers and scientists all have had their own specific concerns about animal infections. Pet owners have been concerned about the health of beloved cats and dogs, while epidemiologists and public health officials have warned that some species – domestic or wild – could become reservoirs where the virus can live and mutate, even if the world tries to fight it In people.

The U.S. Department of Agriculture has not considered vaccine candidates for cats or dogs, and veterinarians have consistently found that there is no evidence that pets can transmit the virus to humans. However, the virus was transmitted to humans from the cultured mink.

However, scientists continue to determine that both cats and dogs get the virus from their owners. Cats are more susceptible, and although most have mild symptoms, several studies have reported cats with severe symptoms. A cat in the UK had to be euthanized.

Dr. Dorothee Bienzle, a veterinarian and immunologist at the University of Guelph in Ontario, who recently completed a study of cats and dogs in households with people with Covid, found several cases of cats with severe symptoms. However, she said that all other diseases should have been ruled out in order to definitively assign the symptoms to the coronavirus; this was not possible in their study, which depended on blood samples and descriptions of symptoms from the owners.

Dr. Karen Terio, a veterinarian and pathologist at the University of Illinois Veterinary School at Urbana-Champaign, repeated that sentiment, saying, “I have heard of cats with severe clinical symptoms but have not seen any cases where they could confirm the signs were on SARS-CoV-2. “

At the latest online meeting of the European Congress of Clinical Microbiology & Infectious Diseases, Dr. Bienzle preliminary research that she and her colleagues had conducted.

They first tested cats and dogs in households where people tested positive for the coronavirus. “We focused on a likely positive population group,” said Dr. Bienzle.

They found that, as expected, more cats than dogs tested positive, 67 percent versus 43 percent. In cats, too, the time they spent with their owners, especially sleeping in the same bed, increased the risk of infection. This was not the case with dogs.

Dr. Bienzle said the advice to pet owners has remained consistent throughout the pandemic. If you have Covid, isolate yourself from your pets as you would from a human. Neither the United States nor Canada endorses vaccination of pets. Dr. Bienzle said that human transmission to the animals could be prevented through social distancing and masks.

Researchers in protected areas and those who work with endangered species like bats have taken stricter measures to keep the animals safe from infection.

For zoos, the question is not whether to vaccinate, but how to approach the patient if it is a tiger. “With a lot of positive reinforcement,” said Dr. Herman. The zoo trains its animals by giving them rewards so that they can voluntarily be stung. It’s pretty much the same idea as getting a lollipop after a shot, though animals are more willing to volunteer than humans.